Gates open at 10:00 a.m. and kick-off is at noon on Saturday, December 3 at Razorback Stadium in Texarkana Arkansas. General admission is $10 for adults and $4 for students.

Agent Barry Live United Bowl Game Events include the Jeans, Boots, & BBQ Game Banquet event from 6:00 p.m. to 8:00 p.m. on Friday. December 2, at the Texarkana Texas Convention Center. Tickets are available online. There will be a Community Pep Rally at 8:00 p.m. that is free to the public and also at the Texarkana Texas Convention Center. On Game Day, there is the Live United Bowl 5K at Razorback Stadium beginning at 8:00 a.m. Register online here. Kick-off of the fourth annual bowl game is at 12 noon. You can purchase tickets online here, or get tickets at the gate. Special half-time entertainment will be a performance by Barret Baber contestant from The Voice, sponsored by EZ-Mart.

The Agent Barry Live United Bowl is an annual college football bowl game played between two of the top teams at the NCAA Division II level. It is one of only three NCAA Division II sanctioned bowl games. The game features the highest place finisher in the Great American Conference that does not qualify for the Division II playoffs. The at-large opponent is chosen from either the Lone Star Conference or the Mid-America Intercollegiate Athletics Association. 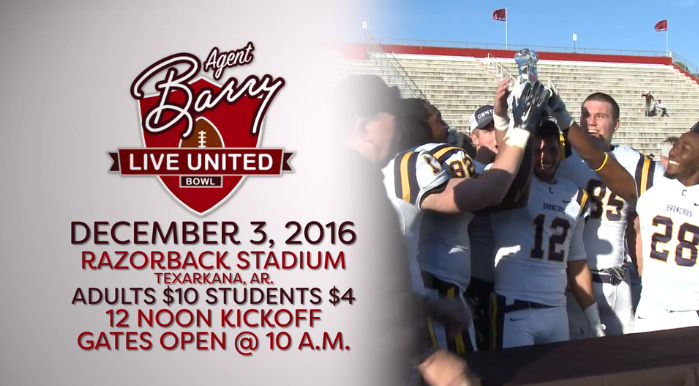