Texarkana Texas Police have arrested Wilmer Joe Hill, Jr., 21, of Texarkana, Texas. He is currently locked up in the Bi-State Jail with a number of charges and a bond that totals $251,351.

The Texarkana Texas Police Department arrested Wilmer Joe Hill, Jr., 21, of Texarkana, Texas early Saturday morning after he was involved in a disturbance at a local apartment complex. 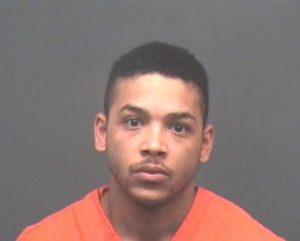 Hill was arrested inside an apartment in the 1900 block of Richmond Road after 9-1-1 calls were received reporting a disturbance at that location at approximately 1:30 a.m. on Saturday.  It was reported that visitors to the apartment recognized Hill as a wanted felon and attempted to detain him until officers could arrive.  The two men told officers that Hill attempted to fight them – at one point picking up a wooden shelf to use as a weapon.  Once officers arrived, Hill was taken into custody without incident.

On October 5, 2016, officers were dispatched to a report of a disturbance involving a kidnapping in the area of Jameson Street and Robison Road at approximately 6:00 p.m.  As officers arrived and exited their vehicles, a vehicle being driven by Hill at a high rate of speed emerged from the back yard of the residence.  As Hill drove through the yard, he swerved the vehicle in an apparent attempt to strike Officer Misty Tyler.  Tyler was able to dive out of the path of the vehicle and avoid injury.  Officers pursued the vehicle west into Bowie County where they lost sight of it in the area southwest of US Highway 67 and South Kings Highway.  Officers then located the unoccupied vehicle on Bottoms Road, where it was overturned in a ditch and on fire.  It is believed that Hill fled into the woods prior to officers arriving.  The Bowie County Sheriff’s Office and Texas Department of Public Safety assisted in the unsuccessful search for Hill or any other possible occupants of the vehicle.

The subsequent investigation revealed that Hill had been involved in altercations with family members earlier that day.  After assaulting the mother of his one-year-old daughter, Je’Nori Serenity Hill, Hill left with the child in the vehicle he was later driving when he fled from officers.  That vehicle was later reported stolen.

A Critical Missing Person Alert was issued for Je’Nori Hill during the early hours of October 6.  The child was returned home to her mother by a third party at about 10:30 a.m. that day.  She had previously been last seen yesterday afternoon leaving the 3900 block of Main Street in the vehicle with Wilmer Hill.  Based upon the totality of the circumstances, there was concern for the safety of the child.

Warrants were issued on October 6 for several charges stemming from the events of the previous day, including Aggravated Assault Against Public Servant, Assault-Family Violence, Evading Arrest in a Vehicle, and Unauthorized Use of a Vehicle.