A man wanted on charges for failing to register as a sex offender and possession of child pornography was arrested today after a traffic stop near the intersection of Highway 59 and Randall Road.
Michael Basham, 29, was the passenger in a pick-up truck that was stopped for a minor traffic violation. After a brief interaction with Basham and the driver of the vehicle Basham ran from the DPS trooper and into a wooded area near the intersection of Randall Rd. and Highway 59, across the street from the Liberty Eylau Primary 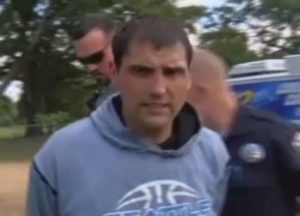 Basham was hiding in the thick brush, and the DPS reached out to the TDCJ Telford Unit for search dogs. Officers from the prison responded with a team of horses and a pack of hounds. Only one scent dog was deployed and within 30 minutes Basham emerged from the brush and was taken into custody by Nash Texas Officers that were participating in the search. Deputies with the Bowie County Sheriff’s Office also participated in the search.

Michael Basham is wanted in Washington State for Possession of child pornography and Failure to register as a sex offender. He now also faces charges in Texas for evading arrest and possession of marijuana.