The Texarkana Arts & Historic District will host a celebration on October 25, 2016 in downtown Texarkana to recognize the accomplishment of being named a Texas Cultural District. Texarkana was one of seven cities to receive this designation in 2016, including Waco, Arlington, Amarillo, Rockport, Plano and Salado.

The celebration will be held at 10:00 a.m. at the post office in downtown Texarkana on Tuesday, October 25, 2016. The celebration will include taking the largest photo in two states at once at Photographer’s Island. The photo will be taken with a drone, and fire and police apparatus from Texarkana, Texas and Arkansas will be pictured as well. Arts and cultural organization members, their boards, community leaders, elected officials and the public are all invited to attend.

According to the Commission, the establishment of a cultural district requires a focus on the arts with carefully laid out plans and collaboration among arts organizations, city and county government entities, businesses and citizens.

Texarkana has applied twice before, but this year’s application was stronger and more fortified than ever before, proving to the commission that the twin cities are working together to build a culturally rich downtown. Texarkana is one of thirty five cultural districts in Texas, and the first in the Northeast region of the state.

The new designation also includes new opportunities for funding. As a recognized cultural district, the Texarkana Arts & Historic District will be eligible to apply for Cultural District Project Grants, which is approximately $2.5 million annually. 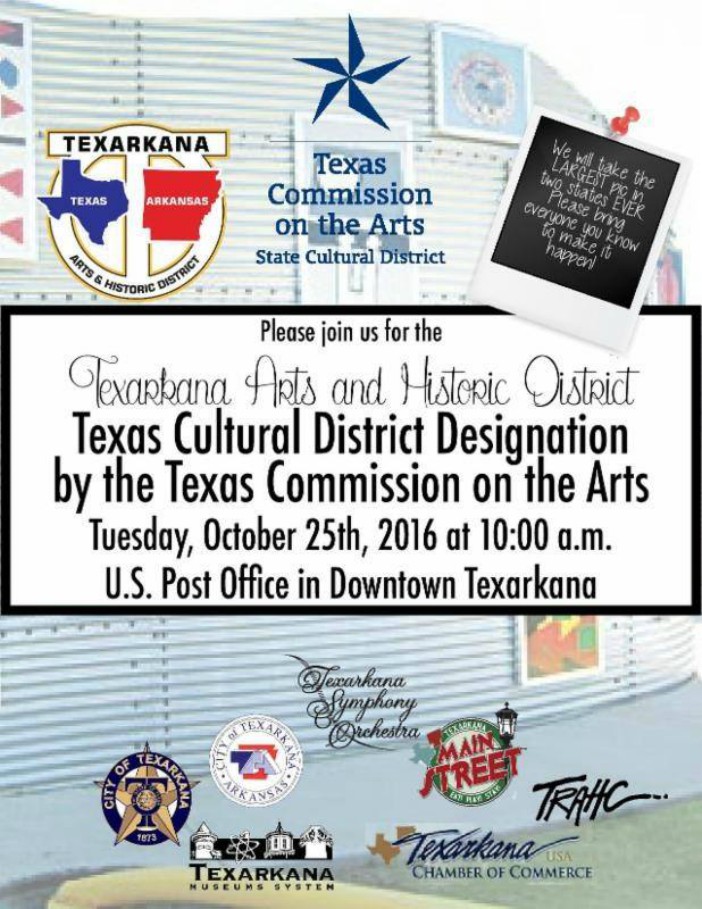