Laderick Johnson, 21, of Texarkana Texas turned himself in this morning to authorities at the Bi-State Jail where he was arrested and booked into custody with a first degree murder charge.

As reported yesterday, Texarkana Arkansas Police responded to Beechdale Apartments—located in the 2400 block of County Avenue—on Wednesday November 2, 2016 at 1130pm in reference to a report of a shooting.  Officers encountered the victim of this incident (Leroy Davis, 44 years of age, of Texarkana, Texas) who was pronounced deceased at the scene shortly thereafter. 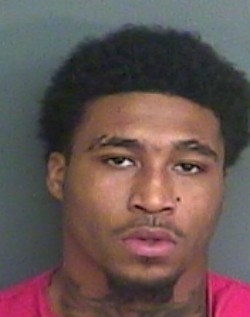 Early on in the investigation, detectives developed information that led them to believe the victim was accompanied by at least two (2) additional people, one of whom believed to be a woman. Based on interviews of witnesses and evidence located at the crime scene, detectives secured an arrest warrant for the suspect, Laderick Johnson, 21 years of age (a resident of Texarkana, Texas) for the offense of 1st Degree Murder.

Detectives believe the elements of this incident that led up to the victim’s shooting death are connected to illegal drug activity.  It is believed the victim was at the address located on County Avenue to facilitate his involvement in clandestine drug activities.

Early this morning, the suspect arrived at the Bi-State Criminal Justice Center where he surrendered himself.  Laderick Johnson was arrested and booked into the Bi-State Jail and charged with 1st Degree Murder.   This case remains under investigation, and anyone with additional information is urged to contact the Texarkana Arkansas Police Department at 903-798-3130.  Thank you and you can visit the Texarkana Arkansas Police Department online at http://www.txkusa.org/arkpolice.