What a great story from TISD and Texas High School about a good man and an American Hero, Paul Ray Mackey. Mackey would have graduated in 1954 but left school in 1953 to serve his country as a United States Marine in Korea. Today, Mr. Mackey received his High School Diploma.

Texarkana, TX – With a Public Hearing on Accelerated Instruction Programs for high school students, policy change, presentation of Asynchronous Remote Instruction Plan and a review of 2nd six weeks learning change opportunity for parents/guardians, it was the awarding of a high school diploma to Korean War veteran, Paul Mackey, that was the highlight of the TISD Board of Trustees regular meeting for September 15, 2020.

Paul Ray Mackey was to have received his high school degree in 1954 but was called upon by his country to serve.  “Many American students gave up their educational dreams when they left high school to enlist and serve their country during time of war,” said Tina Veal-Gooch, Chief Communications Officer.  “Texas Education Code 28.0251 allows school districts to issue a high school diploma to honorably discharged veterans of the armed forces of the United States who served in World War II, Korea or Vietnam and were scheduled to graduate from high school between 1940 and 1975.  They must complete the required documents provided by the TEA and then submit to the local school district where the veteran was enrolled in high school.”

Sixty-seven years ago in 1953, Korean War veteran Paul.Mackey entered into active duty with the United States Marine Corps during his junior year at Texas High School.  “I felt that America needed my help in Korea more than they needed me to finish high school,” said Mackey.

During his 10 years with the US Marines, he served a tour of duty in the infantry, held the position of Admiral’s Aide travelling the world with the Admiral G. C. Towner and was a Drill Instructor.  While with the Marines, Mackey took and passed the high school level USAFI GED and the college Level USAFI GED.  He was honorably discharged in 1962 as a Sergeant E-5.  Awards received included:  Good Conduct Medal, National Defense Service Medal, United Nations Korea Service Medal and the Korean Service Medal.

After his service with the US Marines, Mackey moved to San Diego, California serving as a member of the San Diego Police Department for two years.  He returned home to Texarkana in 1965 becoming the Assistant Manager for Holiday Bowl.  Here is where he met the love of his life, Ann Morrow Mackey, a Texas High School teacher.

Mackey was a Bowling Instructor for Texarkana College and wrote articles on bowling for the Texarkana Gazette. He applied and was accepted into the Army Management Intern School at Red River Army Depot where he travelled the US, recruiting persons for the school.  Upon graduation from Army Management Intern School, Mackey was assigned to duties at the Army Material Command in St. Louis, Missouri where he remained for the next four years.  During his time in St. Louis, he continued his education at Fort Lee, Virginia; developed, designed and tested the newest Army helicopter; and attended college at the University of Missouri.

Mackey’s next assignment would be in Germany working at Heidelberg Command Headquarters, Worms Army Depot and Germersheim Army Depot.

He returned to Texarkana upon being offered a job at Red River Army Depot.  While there, Mackey served as the Moral, Welfare & Recreation Division Chief, assisted with other divisions and was involved with the Rod & Gun Club.  He retired from Civil Service with Red River Army Depot in 1993.

At 84 years young and leaving high school during his junior year to serve his country, Mackey understood then, as he does now, the importance of continuing your education.  However, it is coming back to high school to receive his high school diploma that takes his educational path full circle.  His words to current students is, “finish your education and do not drop out of high school, regardless of the situation. In this day and age, everyone needs to further their education with college and/or vocational training.”

He and his wife, Ann, have one son, Paul Morrow Mackey, a proud college graduate of Texas A&M University-College Station who is married to Leah Manson Mackey and has two children. Paul’s wife and children are proud graduates of Texas High School. 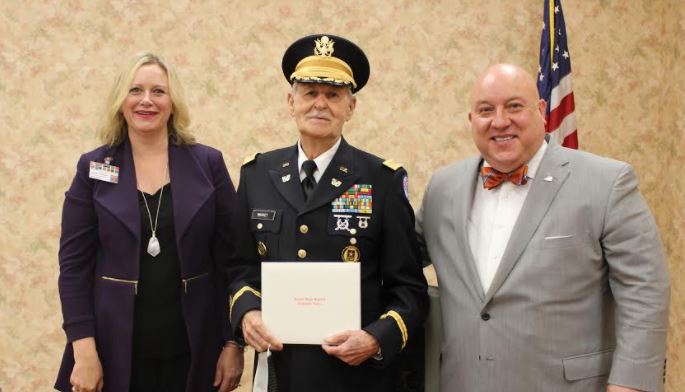