Recently a post on social media spread like crazy regarding a police stop on Highway 67 in Texarkana. The person stopped felt suspicious of the officer, but that officer was indeed a DPS Sergeant on-duty. This brought to mind some basic safety tips that the police want you to know.

It started with a Facebook post from a parent regarding a traffic stop on Highway 67 that involved their daughter. There was some suspicion that the person that pulled her over was impersonating a police officer. In fact, the officer was an on-duty Texas DPS Trooper in a fully-geared, but unmarked Police Cruiser. (I think there may have been some confusion with dispatch due to the timing of the parent’s follow up call.) 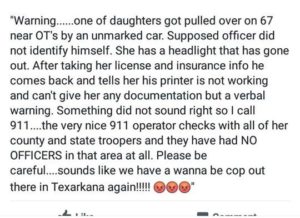 With so many former police vehicles available to the public through auctions, there are a lot of Ford Crown Victorias, Chevy Impalas, Tahoes, Chargers and other former police vehicles on the roads. Most all have seen news stories, or heard of the stories regarding someone impersonating a police officer, and all law enforcement agencies are sensitive to the fact that it is a real safety concern.

These are some basic safety tips for being pulled over by an unmarked police vehicle. First, if you are breaking the law and flashing lights show up in the rear-view, you have a pretty good idea if you are being pulled over by a real officer or not. However, if you are suspicious of the vehicle pulling you over and you are in a rural or desolate area, drive to a well-lit, populated area before stopping. Don’t drive erratically or evasively. You can signal to the officer that you know he is behind you. You should use your mobile phone to call 911 to verify that you are in fact being pulled over by an officer. Tell the dispatcher where you are and what is going on, then follow the dispatcher’s instructions. Do remember that the DPS uses a different dispatch system than Texarkana or County agencies, so it may take a few minutes to verify with the local 911 dispatchers.

We spoke to Chief Neal with the Bowie County Sherrif’s Office and he offers,

Officers initiating a traffic stop, even those in unmarked vehicles and plain clothes will have their badge on full display and an official Identification card. Officers have a number of ways to prove their identity, from their badge to identification cards. The officer will provide the phone number of the agency to help verify.

We reached out to Sergeant Sylvia Jennings, Public Information Officer for the Texas Department of Public Safety Texarkana Area, and she had this advice,

If you are a female traveling alone, and you are suspicious of an unmarked vehicle attempting to stop you, slow down, don’t speed up. You can turn on your flashers, and signal to the officer that you are aware of them. Another good thing to do is turn on your interior dome light so that the officer can realize that it is a female in the car and we are in the middle of nowhere and she is looking for a safe place to stop. Don’t just look for a well-lit area, make sure there are people there. When you do pull over, until the officer is able to put you at ease, you do not have to roll your window all the way down, just roll it down far enough to communicate with the officer and pass your documents. The best advice I can give is to call 911 on your mobile phone and stay on the phone with the dispatcher.

We also reached out to Officer Kristi Bennett with the Texarkana Arkansas Police department and she added this,

TAPD does have Police Officers operating undercover in unmarked police cars from time to time.  These officers are usually conducting undercover surveillance or simply patrolling for criminal activity that would not be generally occurring openly around a marked police unit.  All of our undercover vehicles that are used to conduct traffic stops are properly equipped with flashing red and blue lights which are typically unseen when not activated.    If an individual is pulled over by such acting undercover police officers they will immediately identify themselves as such and advise the reasoning for the traffic stop. If an individual is approached by a vehicle attempting to pull them over and they are not sure the situation is legit they should proceed at a safe slow speed (to indicate that the person is not attempting to flee) while calling 911 to verify that an officer is attempting a traffic stop on their vehicle at their location.