Over his career with the Texarkana Arkansas Police Department, K9 Officer “Gus” has made many arrests, and has had stellar performances in K-9 Competitions on the National Level with his partner Corporal Randy McAdams. After seven years on the job,the TAPD has announced that Gus has retired.

The Texarkana Arkansas Police Department announces the retirement of K-9 Gus today after 7 years of dedicated service to the citizens of Texarkana, Arkansas. K-9 Gus served with his partner Corporal Randy McAdams for his entire tenure with TAPD.

K-9 Gus and Cpl. McAdams performed very well as a team, both in their assigned duties on numerous tracks, apprehensions and narcotic finds on the streets and in K-9 certification trials. While attending USPCA K-9 trails, Gus certified every year and his scores qualified him to move on to compete at the national level. The last two years of certifications Gus was awarded the prestigious Top Dog Overall Award in our region. Gus scored among the best in narcotics and outscored all other K-9 Teams in the Patrol category. Gus competed at the National Level in the United States Police Canine Association in both patrol and narcotics.

Throughout his service Gus never lost his drive to work with school children and the public on awareness efforts.  Gus loved to interact and bring a smile to a child’s face, he undoubtedly touched many lives.

Gus will remain with Cpl. McAdams after retirement and we wish him a lifetime full of happiness. 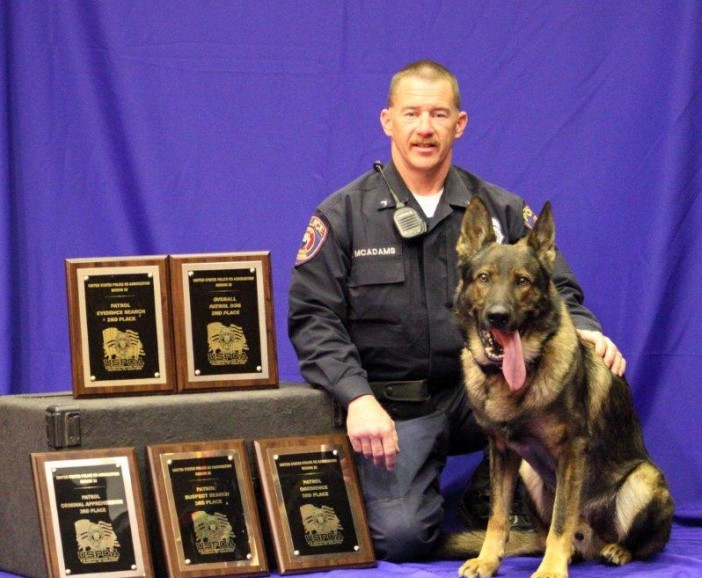