The Texarkana Arkansas Police are investigating a stabbing that occurred overnight at the intersection of East 10th and California Streets that left one man dead, and a woman in custody facing murder charges.

On Wednesday, October 5th 2016, at 11:00pm, the Texarkana Arkansas Police Department responded to the intersection of East 10th and California Streets in reference to a report of a stabbing.  Upon officers’ arrival they located the victim, Jeffery Baker, 43yoa B/M, lying in the middle of the road bleeding profusely. 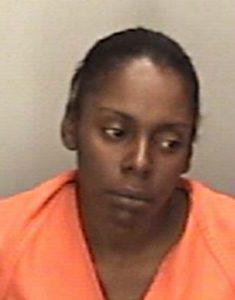 The investigation revealed that Baker had traveled to the residence on California Street of the suspect, Sherry Woods, 35yoa B/F, to continue a previous argument with his girlfriend.  An altercation ensued in the street that resulted in Woods stabbing Baker with a knife.

LifeNet arrived and transported Baker to Wadley for medical attention where he later died from his injuries.

Woods was arrested and charged with 1st degree Battery.  All additional charges- including enhancement of the 1st degree Battery charge- will be based upon a review of the case by the Prosecuting Attorney’s Office.