The Texarkana Arkansas Police have identified a suspect from the Paradise Club shooting that occurred over night on 9th Street in Texarkana, Arkansas. Police are seeking information on the whereabouts of LaJason Coakley. 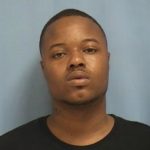 On 08/20/2016 at approximately 1:00am, Texarkana Arkansas Police were called to a disturbance at the Paradise Club, 2502 E 9th. When police officers arrived they located victim Montel Waller, 23 years of age, who was suffering from a single gunshot wound. Waller was transported by Lifenet Ambulance to Wadley hospital where he underwent treatment and is in recovery.

Texarkana Arkansas Police immediately began investigating the shooting and have identified LaJason Coakley, B/M, 05/30/1993, as the shooter. A felony arrest warrant for Battery 1st Degree has been issued for his arrest. Anyone with information on this shooting, or the whereabouts of Coakley, is urged to contact Texarkana Arkansas Police as the investigation will continue.