The Texarkana Texas Police Department is seeking information that leads to the arrest of Montez Deshean Anderson, 30, of Wake Village, Texas for aggravated assault with a deadly weapon.

The Texarkana Texas Police Department has obtained an arrest warrant for Aggravated Assault with a Deadly Weapon for Montez Deshean Anderson, 30, of Wake Village, Texas. 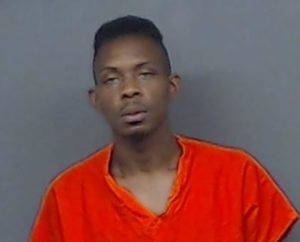 Officers were dispatched to a convenience store in the 2700 block of South Lake Drive at 1:40 p.m. on October 27 where they found a 27-year-old Conway Arkansas man lying in the parking lot.  The man had been shot twice in his upper chest.  He was transported to Wadley Regional Medical Center by LifeNet and underwent surgery that afternoon.  The victim is expected to make a full recovery.

Detectives determined that the victim had been a passenger in a vehicle at Findley Park.  For unknown reasons, Anderson fired at least two shots through the rear passenger side window, which struck the victim.  The vehicle’s driver then took the victim to the convenience store on South Lake Drive, where officers were then summoned.

While the exact nature of the relationship between Anderson and the victim is not known, it is believed that they are at least acquaintances.

Anyone with information on Anderson’s whereabouts is asked to contact the Texarkana Texas Police Department at 903-798-3116 or CrimeStoppers at 903-793-STOP.  The weapon used by Anderson has not yet been recovered, so he should be considered armed and dangerous.