The Texarkana Arkansas Police Department SWAT team responded to the Ambassador Inn on Stateline Avenue Tuesday night. Officer initially responded to a welfare call and found that the situation had quickly escalated to a shots fired situation. One suspect was arrested and faces multiple charges.

On 5/23/17 at approximately 8:00 pm, patrol officers from the Texarkana Arkansas Police Department responded to the Ambassador Inn at 200 Realtor Ave., in reference to a report of a welfare concern.  When they arrived, officers discovered the situation had escalated into a possibly barricaded suspect with shots fired. 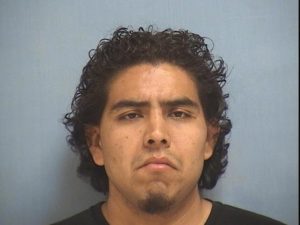 Patrol officers were able to determine that the victim had been in his 2nd floor motel room with the door open and two other friends had arrived to visit.  While the door was still open, the suspect, later identified as Ricardo Manzarnes (h/m/26 y.o.a.), walked in to the room uninvited and was carrying a pistol in his hand.  Manzarnes was reportedly behaving erratically and walked toward the bathroom.  He reportedly stated that someone was trying to kill him, and it was at this point he turned toward the window and fired three shots through the glass.  The three occupants of the room immediately fled in fear for their life, and the suspect locked himself in the room.  (The suspect was not known by the victims…)

TAPD SWAT was called and while a tactical team was in route, patrol officers attempted to speak to the suspect through the door.  After briefly talking with the officers, the suspect broke off communication.  At the same time, other officers were busy evacuating the surrounding rooms.  SWAT officers and Crisis Negotiators made verbal contact with Manzarnes and at approximately 9:45pm he surrendered and was taken into custody.  A search of the room revealed a loaded 9mm handgun and spent shell casings on the floor.

Manzarnes was booked into the Miller County Jail on three counts of Aggravated Assault, Possession of Firearms by Certain Persons (felon in possession of a firearm), and a charge of Theft by Receiving was added after it was determined that the pistol had been reported as stolen.  All of these are felony charges.  No injuries were reported.