Carl Finch, Texarkana Native and founder of the Grammy Award winning Polka group “Brave Combo”, is a 1970 graduate of Texas High, and a new member of the International Polka Hall of Fame. 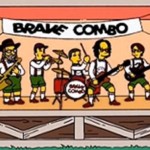 The Denton Texas bases band Brave Combo has picked up a couple of Grammy Awards since they got started back in 1979, both in the Best Polka Album category, one in 2000 for the album “Polkasonic“, and another in 2004 for “Let’s Kiss: 25th Anniversary Album” and many other nominations. Even though Finch and the band are deeply “Polka” the music goes further than that label with many different genres coming into the groove of so many of their songs. From rock ‘n roll to reggae beats can be heard in their music, but make no mistake, you definitely know it’s Polka.

A highlight for any band, is an appearance on the long running Fox animation staple, the Simpsons.