The Texarkana Arkansas Police Department arrested LeRoydrick Rashad Dickerson, 27, of Texarkana Arkansas after a short vehicle pursuit following a traffic violation. Dickerson was found to be in possession of two loaded firearms, and a quantity of marijuana.

Video of the arrest was loaded to the Facebook Group Texarkana Worldstar. The video was captured on a cell phone by a bystander. Considering that the suspect was armed and not submissive during arrest, it seems to us that it is a good thing that nobody was seriously injured in this incident.

T.A.P.D. has asked the F.B.I. to investigate this case.

On Thursday May 7, 2017, at approximately 9:56pm, Officers from the Texarkana Arkansas Police Department witnessed a red Ford Mustang driving at a high rate of speed and in the wrong lane of traffic in the 3500 block of Ash Street.  Officers activated their emergency lights and attempted to stop the vehicle but the vehicle continued to drive approximately 4 blocks and turned into a parking lot in the 3300 block of Stateline.  The 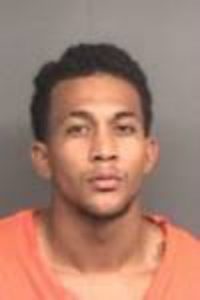 Officers activated the siren and the driver continued to drive around to the rear of the business parking lot before stopping.  The driver (later identified as LeRoydrick Rashad Dickerson, B/M, 27 yoa, 6’5”, 200lbs., of Texarkana, AR), parked the vehicle and immediately began walking north, away from the car and the officers.  The officers told the suspect to stop but he ignored repeated verbal commands from both officers.  As the suspect walked away from officers he reached into his waist band as though he was trying to retrieve something.  Fearing that he was reaching for a weapon, officers caught up to the suspect and tried to restrain him but he jerked away from them.  The officers then placed Mr. Dickerson on the ground in an attempt to handcuff the suspect, but the suspect continued to jerk his arms away from the officers and kept trying to reach toward his waist.  The officers used defensive tactics they have been trained to use and were able to get his arms behind him, but he continued to try to pull away and stiffen his body to resist officer’s efforts to handcuff him. During the process of trying to handcuff Mr. Dickerson, Officers had to push Mr. Dickerson’s head down in order to control his upper body as Dickerson tried to raise himself from the ground. A third officer arrived on scene, at which point the two original officers were finally able to handcuff the suspect.

Upon placing Mr. Dickerson into custody, they searched him and found a loaded .22 caliber pistol in his front right pocket where Dickerson was reaching towards when Dickerson refused to stop after exiting his vehicle. A large sum of money was located in Dickerson’s front left pocket, a digital scale and a large bag of marijuana (55 grams) in his hoodie pocket.  Upon searching the vehicle Mr. Dickerson was driving, they found another small bag of marijuana as well as another loaded pistol, with one spent cartridge and four live rounds.

Mr. Dickerson was charged with Possession of a Controlled Substance with Intent to Deliver, Simultaneous Possession of Drugs and Firearms, Fleeing, Failure to Yield to an Emergency Vehicle, Possession of Firearms by Certain Persons (felon in possession of a firearm) and Resisting Arrest.

Dickerson has previously been convicted of Theft of a Firearm (a felony) and was sentenced to three years in ADC. He is currently on supervised probation.

The Texarkana Arkansas Police Department has asked the FBI to review and adopt this case due to the fact that narcotics and firearms are involved. Not only has this case been reviewedby the TAPD, but will also by the Department of Justice, which holds stricter sentencing guidelines.