It is time for the 34th Annual Main Street Texarkana Christmas Parade in downtown Texarkana. The theme for the 2018 parade is “My Favorite Christmas Memory”, and will feature more than 100 lighted floats.

A longtime Texarkana Tradition, the annual Main Street Texarkana downtown Christmas Parade, is one of the area’s biggest events. 2018 will be no exception with over 100 lighted entries, the live camels, bands and more.

The parade begins at 7:00 pm on Monday, December 3.  Here is the parade route for this year.

This year the parade route is similar to how it was years ago. The parade will begin at the usual location at the intersection of Hazel Street and Broadstreet, but instead of taking the curve into Front Street Plaza, the parade will go straight down Broadstreet to Texas Boulevard. Entries will take a right onto Texas Boulevard from Broadstreet, then the very next right onto 3rd street, continue to Stateline Avenue where the route will take a left and go north towards the Federal Building. There will be no parking allowed on Broadstreet along the parade route.

Our friends at KLFI-TV will be recording the parade for playback. Here is a link to the 33rd Annual Parade. 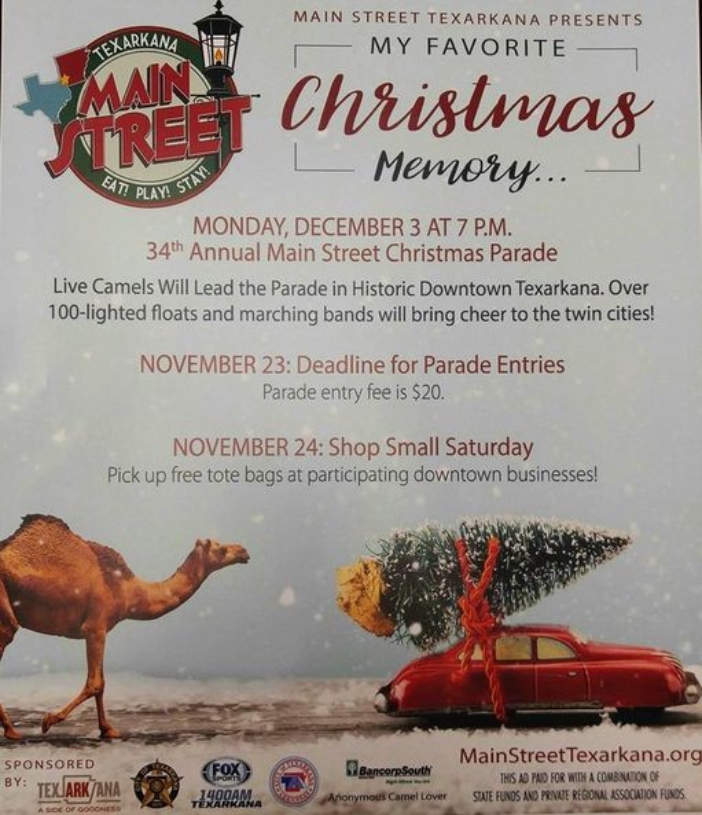