In a crime that has shocked the entire Ark-La-Tex, a senseless murder in the Fouke Arkansas community has shattered lives of some residents. A 12-year-old boy has been arrested in connection to the February 2 early morning murder at the EZ-Mart Store in the small southwest Arkansas town.

The Miller County Sheriff’s Office responded to the Fouke, Arkansas EZ-Mart on US Highway 71 just after 2:00 a.m. this morning.  A local newspaper carrier had entered the store and found the clerk, Christa Shockley, white, female, 21 years old, un-responsive on the floor.  Sergeant Hillis, Corporal Ward, and Deputy Klink of the Miller County Sheriff’s Office Patrol Division responded to the store along with two local first responders from Boggy Creek Volunteer Fire Department, Randy McAdams, and Randy McCormick.  It was determined Ms. Shockley had been a victim of a homicide.  Deputies secured the scene, identifying possible witnesses in the area, and notifying family members

Near 7:00 a.m. personnel from the Fouke School District were contacted and given a brief summary of the investigation.  At that time no suspects had been identified, however, it appeared the victim had been specifically targeted.

Members of the investigative units continued to work diligently with EZ-Mart employees in an attempt to locate evidence and determine the identity of the suspect.

At approximately 8:00 a.m. critical items of evidence including the clothing the suspect wore during the crime and the pistol believed to be used to commit the crime had been recovered.  A juvenile suspect was identified.  Because of his age and as a precaution, the Fouke School was contacted a second time with the new information and Deputies were sent to the school to help ensure the safety of the students and staff.

Shortly after 8:00 a.m. the suspect was arrested in the Fouke City limits.

The suspect is a 12-year-old white male juvenile and his name is not being released in compliance with state law.  He has been charged with Capital Murder and Aggravated Robbery. He is currently being held in the Miller County Juvenile Detention Center.

The investigation into the incident is continuing by the Miller County Sheriff’s Office.

No further information is available for release at this time. 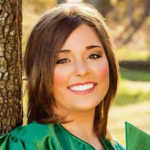 Ms. Shockley was respected by so many in her community and at such a young age she made such a positive impact on so many people. Having recently celebrated her 21st birthday, she was working two jobs and was attending college in Texarkana. Looking at her Facebook page, the posts and comments from her family and friends is nothing less than heart-breaking. However, I did notice so many comments about how strong she was in her faith and her involvement with her church. Posts about how positive she was, and so many comments about her beautiful bright smile. Fouke Arkansas Mayor Terry Purvis posted,

I do not even know how to explain what happened here in our City early this morning. Please be in prayer for all the families involved in the tragic and senseless killing of this young girl. I am just shocked. No words can express the grief we feel here in our City. We are all family here, and hurt so bad for the families and the victim. Again please be in prayer for the family and our City.

As for the 12-year-old boy that allegedly carried out the crime, his identity is not being released by law. At this time there has been no confirmation for a possible motive other than robbery, but Miller County Investigators have said that it appears the victim could have been specifically targeted. The alleged shooter is being held in the Miller County Juvenile Detention Center.

I would like to add here that the EZ-Mart company has taken a lot of heat for re-opening the store later in the day, however, it should be known that it was the Shockley family that gave permission for the store to re-open. A decision that was theirs to make out of respect from EZ-Mart. A lot of people are feeling a certain kind of anger over this crime, it is just so hard to get your head around how such a bright young lady with the whole world ahead of her, can be killed by a 12-year-old boy. In small town Fouke. It is tragic. It is tragic for all of the families involved, the officers and first responders that were there and respectfully held a sort of vigil in the EZ Mart parking lot in a drizzling rain. We here at TexarkanaFYI offer our condolences to the Shockley family and prayers for all touched by this horrific tragedy.