Texas recording star Aaron Watson will be performing at Scottie’s Grill in Texarkana on Saturday, September 9 for the Hurricane Harvey Relief Event. Special guest Cameron Nelson will open the show.

Aaron Watson will perform hit songs from his many albums, including “Underdog” the record-breaking album released in 2015 that made him the first independent male artist to debut at number one on the Billboard Top Country Albums chart with a self-released and independently distributed and promoted album.

Watson is touring his new album “Vaquero“.  Special guest Cameron Nelson will open the show this Saturday at Scottie’s Grill.

Among items to consider donating at the event:

From the Event Page:

We have the great opportunity to help our fellow Texans in the Houston area. With numerous tickets pre-sold for Texas country artist Aaron Watson, we could not turn down the chance to make this gathering a way for Texarkana to help Hurricane Harvey Victims. ArTex Truck Center has donated a truck that will be on-site to accept physical donations (please see the list of items requested on the event image). Redwater High school has volunteered to accept any overflow of items. The Salvation Army will be on-site collecting monetary donations. 100% of the donations will go to help Harvey victims. Help us prove that Texarkana is Twice as Nice! 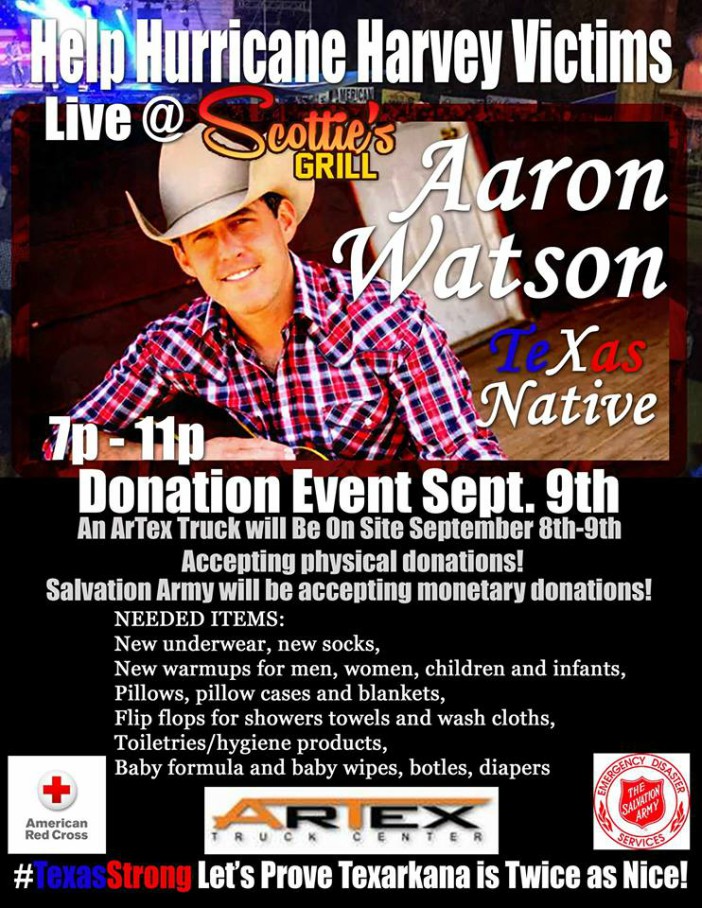