The Arkansas Game & Fish Commission are excited over the recent discovery of a nesting area for a bird that has not been known to have a nesting area in the state of Arkansas since 1948.

A local land-owner was informed by the Arkansas Game & Fish Commission that it is believed that the Swallowed-tailed Kite, one of our most beautiful birds of prey, may be nesting on his property or property adjacent to his. Biologist Brad Townsend with the Arkansas Game & Fish Commission has been conducting a search for the nesting area. He told us,

The Swallow-tailed Kite is usually a coastal bird, and has been sighted in the state before but to find that they are nesting here in Arkansas would be a huge discovery in understanding how their migratory patterns could be changing. They usually stay much further south in coastal areas and south America.

They have been searching on land and in the air with helicopters, if that tells you how important this discovery is. Biologists with the State agency are confident that the nesting area will be discovered in this area soon.

The lilting Swallow-tailed Kite has been called “the coolest bird on the planet.” With its deeply forked tail and bold black-and-white plumage, it is unmistakable in the summer skies above swamps of the Southeast. Flying with barely a wingbeat and maneuvering with twists of its incredible tail, it chases dragonflies or plucks frogs, lizards, snakes, and nestling birds from tree branches. After rearing its young in a treetop nest, the kite migrates to wintering grounds in South America.

Officials are expecting to discover the nesting area locally at a place on private property known as “Lake Landon”. Swallow-tailed Kites can be found over swamps, marshes, and other bodies of water of the southeastern United States. Come end of the summer, Swallow-tailed Kites in the U.S. leave and migrate south to South America. 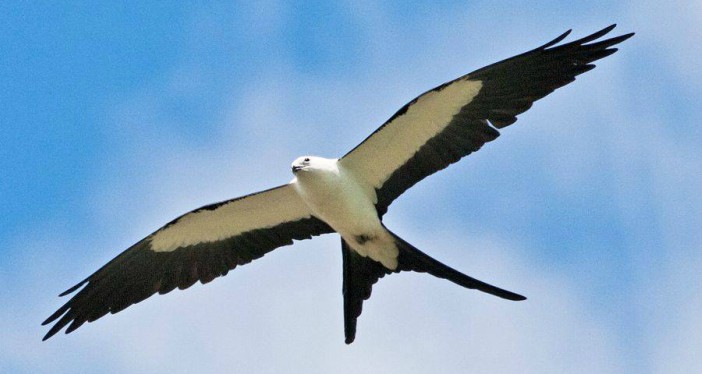