Bowie County Deputy Westin Fannin responded to a call of a suspicious vehicle on Cardinal Lane in the early morning hours of May 26, 2017. The person who called 911 about this car had advised that when she turned on her front porch light to see who was outside the driver of the vehicle turned off the headlights of their car. Deputy Fannin found a vehicle matching the description of the suspicious one 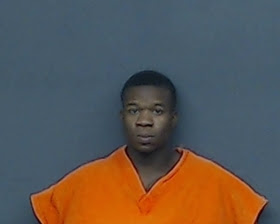 called in a short distance away parked in the driveway of a home on Carrol Lane. As he approached the vehicle, Deputy Fannin observed a black male run from the garage area of this home and get in the rear seat of the car. He also noticed there was a white female in the driver’s seat of this same vehicle. Deputy Fannin made contact with these two occupants. While speaking with the male subject he saw there was something silver lying in the floor that this person was attempting to conceal with his foot. Believing this item to be a firearm, Deputy Fannin instructed the male to move his foot. This revealed a handgun that the male attempted to retrieve. The male was ordered out of the vehicle and complied. He was identified as Eric Lamont Turner and the driver of the vehicle was found to be Katelin Marie Jordan. The two told Deputy Fannin that they were out in the area with a friend named Brian Jackson whose white German Shepard had 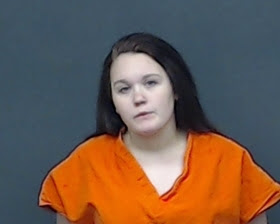 jumped from the car and ran off. They claimed they were simply out looking for their friend’s lost dog when Deputy Fannin found them. Due to this highly doubtful story and the male occupant’s suspicious actions, Deputy Fannin asked the two for consent to search their vehicle which they granted. Located during this search was a black purse, two masks, several bandanas, a BB gun, a drill, a tool bag, a radar detector, two vehicle television screens and a pipe commonly used for smoking methamphetamine. Information was found inside the purse that indicated it belonged to a Tabitha Hasley. Lieutenant Brent Caudle found Mrs. Hasley at her home on Cancun Street. She checked her vehicle found that it had been burglarized and her purse was missing from it. Mrs. Hasley described her purse and it was found to be the same one located in the car with Mr. Turner and Ms. Jordan. The pair were then arrested for Burglary of a Vehicle. After being arrested, Ms. Jordan confessed to driving Eric Turner and Brian Jackson around to different locations where she would park their vehicle and the two would exit. They would return a short time later with stolen items and she would drive them to the next location to repeat these actions. Eric Turner was also charged with Possession of Drug Paraphernalia. Mr. Turner and Ms. Jordan were booked into the Bi-State Jail where they await having their bonds set. Mr. Jackson had not been located at the time of this press release.