The Texarkana Texas Police Department arrested Shemar Harris, 18, of Texarkana Arkansas, on Saturday at Academy Sports for several charges after he fled from an off-duty officer and pointed a gun at a citizen who was trying to assist the officer.

The Texarkana Texas Police Department arrested Shemar Harris, 18, of Texarkana Arkansas, on Saturday at Academy Sports for several charges after he fled from an off-duty officer and pointed a gun at a citizen who was trying to assist the officer. 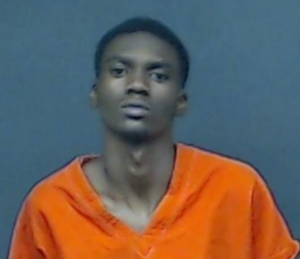 Officer Alan Bailey was off duty and shopping at Academy Sports at approximately 1:45 on Saturday afternoon, when store employees recognized him as an officer and asked for his assistance with a man they believed had just stolen several boxes of ammunition.  Bailey identified himself to Harris as a police officer and asked the man to remove everything in his pockets.  Harris then fled across the parking lot with Bailey and store employees pursuing him.  A man who was walking toward the store entrance realized what was happening after Harris almost ran into his son and joined the pursuit.  As the man caught up with him, Harris stopped running, pointed a gun at him, and ordered him to back off.  Harris then continued to flee but Bailey was able to overtake him and began to struggle with him in the parking lot.  After the man warned Bailey that Harris had a gun and it appeared was trying to remove it from his pocket, Bailey struck Harris one time in the face with his fist to try to stun him long enough to take him into custody.  Another man was able to remove the loaded .40 caliber pistol from Harris’ pants while Bailey continued to struggle with him.  With the assistance of the two men, Bailey was finally able to gain control of Harris.  When other officers arrived moments later, they handcuffed Harris and transported him to the Bi-State Jail.

Harris’ pistol had previously been reported stolen in Bowie County.  Officers also found a small amount of marijuana in his pocket when they searched him.

Bailey suffered a broken hand while attempting to arrest Harris.  He was treated and later released from Texarkana Emergency Center.

Harris’ charges include Theft of Property, Possession of Marijuana, Deadly Conduct, Theft of a Firearm, Resisting Arrest, and Evading Detention.  His total bond has been set at $75,000.