The Texarkana Arkansas Police Department are reporting that they have arrested and charged Charles Harvey, 51, with Commercial Burglary and Theft of Property in the break-in that occurred at Joe’s Pizza & Pasta in downtown Texarkana.

On 05/10/2017, Officers with the Texarkana, AR Police Department were notified of a commercial burglary at Joe’s Pizza and Pasta that had occurred overnight. Surveillance video of the incident was gathered by the Criminal Investigation Division and still shots were disseminated to surrounding law enforcement agencies. Officer Poole with TAPD, who is also a veteran, readily identified the logo on the suspect’s shirt as the patch for the 101st Airborne Division, the “Screaming Eagles.” Still shots from the surveillance video were also posted to the Police Department’s Facebook page. Several members of the public commented on this post regarding the military emblem on the suspect’s shirt as well. 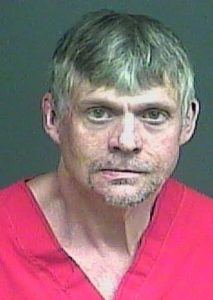 Around 4:40 PM on 05/11/17 the Police Department was contacted by owners of a small business in the downtown area, advising they believed they had spotted the subject posted on TAPD’s Facebook page. Officers and Detectives responded to the area, but were unable to locate the suspect. Approximately 15 minutes later, a resident near E. 24th Street contacted the Police Department, stating they had also just seen the subject posted on TAPD’s Facebook page. Patrol Officers were able to respond and locate the subject at E. 23rd and Beech Street.

The suspect, identified as 51 year old white male Charles Harvey, voluntarily responded to the Bi State Building to speak with Detectives regarding the burglary of Joe’s Pizza and Pasta. It was discovered Harvey had recently been released from Texas Department of Corrections and moved to 305 Senator Street. Detectives were able to secure a search warrant for Harvey’s residence, where they located the shirt with the “Screaming Eagles” emblem on it. Detectives also discovered additional evidence linking Harvey to the burglary. An arrest warrant was promptly issued for Harvey and he was placed under arrest and charged with Commercial Burglary and Theft or Property.

The Texarkana Arkansas Police Department is thankful for the members of the community for their assistance in solving this crime.