The Texarkana Arkansas Police Department has arrested two suspects in connection to the aggravated robbery at the EZ-Mart Store on Jefferson Avenue on January 26. One of the suspects attacked the clerk with a hammer during the crime. 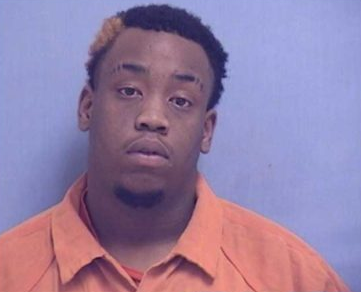 On Thursday, January 26th, 2017 at approximately 1:30am, an unknown suspect dressed in black, wearing a shiny metallic mask and a carrying a hammer, attempted to rob the EZ Mart store located at 3920 Jefferson Avenue.  During the commission of the crime the suspect struck the store clerk with the hammer.   The store clerk ultimately fought off the suspect and chased him from the store. Thankfully the store clerk received only minor injuries from the incident.

Photographs of a subject in the store less than a minute before the robbery occurred, were posted to social media.   Subsequently, a witness came forward identifying both the robbery suspect, a 15yoa juvenile male, as well as his accomplice, 21yoa, B/M, Devin Whitaker of Texarkana, AR.  Both Whitaker and the juvenile male suspect were located at a local apartment complex and charged with aggravated robbery and battery in the second degree. Whitaker was booked into the Miller County jail, while the juvenile is being detained at the Miller County Juvenile Detention Center.