The Texarkana Texas Police Department is seeking information on Michael Gray, 19, of Texarkana Texas. No charges have been filed on Gray in the shooting death of Drake Griffith, 18, but police believe he may have critical information important to the investigation.

The Texarkana Texas Police Department is asking for the public’s help in locating Michael Gray, 19, of Texarkana Texas, who is a person of interest in the shooting death that occurred on Monday night.  No charges have been filed against Gray.  However, we have reason to believe that he might have 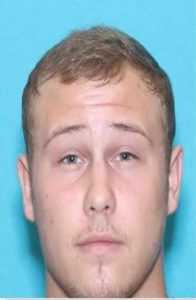 critical information about the shooting.

Officers were dispatched to a shooting at a residence in the 3500 block of Magnolia Street late on Monday.  When officers arrived, they found Drake Griffith, 18, deceased on the floor of one of the bedrooms with several gunshot wounds.  Griffith, who was shot by a resident of the home, was one of two people involved in what appears to been a botched robbery attempt related to drugs.

If anyone has information on Gray or his whereabouts, they are asked to contact the Texarkana Texas Police Department at 903-798-3116 or Texarkana CrimeStoppers at 903-793-STOP.