A man with 17 felony convictions was arrested in connection to the recent theft of an ATM machine from the Sav-a-lot Store on East Street. Joshua Rigsby, 33, of Texarkana, Arkansas, has been arrested and charged with Commercial Burglary, Theft of Property (felony) and Possession of a Firearm by Certain Persons.

On 04/28/2017 at approximately 4:30am, Texarkana Arkansas Police Officers responded to a burglary alarm at the Sav-A-Lot on East Street. When officers arrived on scene they discovered the business storefront had been crashed and ultimately learned that an ATM machine had been stolen when two unidentified males backed a stolen Ford pickup through the front of the business. 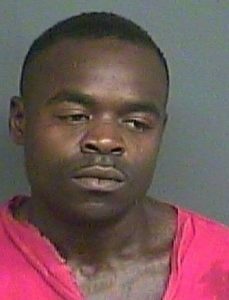 Pursuing leads discovered at the scene, and more leads developed by relentless investigative efforts for 5 days, an arrest warrant for Joshua Rigsby, 33 years of age, of Texarkana, Arkansas, was issued and served Thursday, 05/04/2017 on Rigsby.

A search warrant was conducted of Rigsby’s Pinehurst Village Apartment where evidence associated with the crime was discovered. A Colt Firearm was also located under the mattress where Rigsby slept. Rigsby is a 17 time convicted felon and therefore not allowed to possess a firearm.

Investigators learned the Ford pickup used in the burglary had been reported stolen from McLarty Ford in Texarkana, Texas. Texarkana, Arkansas detectives located this stolen Ford pickup within hours of the burglary based on the investigative experience of one of the detective supervisors.

Rigsby has been charged with Commercial Burglary, Theft of Property (felony) and Possession of a Firearm by Certain Persons.