Two suspects in a Bowie County animal abuse case that enraged locals when the incident was captured on surveillance video have been arrested after a warrant was issued by Judge Nancy Talley.

Two white males, 20-year-old Alan Willis of Dekalb Texas and an a juvenile male were arrested and charged with Cruelty to Non-Livestock Animals.

We first reported the incident on July 2 with a piece of the surveillance video that was taken at the Phillip’s Forest Products Lumberyard in DeKalb Texas. (We had mistakenly understood the video to have been from the Hooks store originally and we apologize for any misunderstanding our error caused to those in the Hooks community.)

On July 2, 2016 Deputy Russell Crawford responded to an animal abuse call in the 13000 block of a Highway 82 West in DeKalb, Texas. There Deputy Crawford met with Allen Phillips who told him that he had arrived at work that morning to find some beer cans lying around yard of the business. Mr. 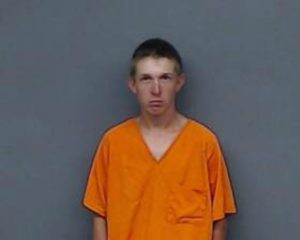 Phillips then reviewed the business’ security camera footage and found that two white males had been in the yard of the business while it was closed. Mr. Phillips said the two white males could be seen on video chasing a puppy around the yard, tossing it around and hitting it with a two by four. The two white males then attempted to retrieve a puppy that ran under a porch, but where unsuccessful in doing so. They left for a short period of time, but returned once more to chase the puppies around the yard. Mr. Phillips did not know who the suspects were at the time of this report and was unable to provide the video footage to Deputy Crawford. Later in the day, information was relayed to Deputy Westin Fannin that the suspects in this case were Alan Cole Willis and his white male juvenile friend. Lieutenant David Childers who was assigned to investigate this case called Mr. Phillips to collect a copy of the video. Mr. Phillips informed him that he was out of town and no one would be at the business until Monday July 11, 2016. Alan Willis was interviewed prior to Lieutenant Childers having the video footage and he admitted to chasing and throwing rocks at a puppy. The video footage of this incident was obtained from Mr. Phillips when he got back in town. This video shows the suspects flipping a puppy in the air and throwing rocks at it. It did not show either suspect striking a puppy with a two by four. The white male juvenile was also interviewed and a statement was collected from him as well. Lieutenant Childers then prepared probable cause affidavits for Alan Willis and the white male juvenile for Cruelty to Non-Livestock Animals. These affidavits were presented to Judge Nancy Talley who determined probable cause and issued arrest warrants for both suspects. Alan Willis turned himself in for his outstanding arrest warrant on July 13, 2016. He was arrested and booked into the Bi-State Jail where Judge Talley later set his bond at $15,000.00. The white male juvenile turned himself in at the juvenile detention center on July 14, 2016 where he was arrested and turned over to juvenile authorities.

(Editors Note – It is important to keep in mind that all pups are fine, even that little ol’ runt, and they need homes.)
.