The Texarkana Texas Police have arrested a woman and charged her with 3 counts of child endangerment after a child was thrown from her vehicle in an accident on Stateline Avenue. Investigators were able to determine that all told, 3 children were in her vehicle at the time of the wreck with no seatbelts or child restraint seats.

The Texarkana Texas Police Department arrested Yvette Eason, 30, of Hope, Arkansas for three counts of Endangering a Child on Friday. 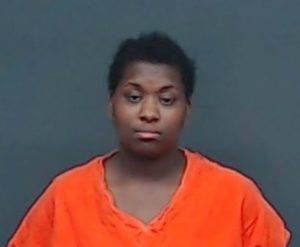 Eason was involved in a motor vehicle crash in the 3500 block of North Stateline Avenue on March 1.  She was driving a 2007 Jeep Cherokee when she pulled into the path of a southbound 2008 Honda Accord as she attempted to exit a business parking lot.  When the vehicles collided, the rear of Eason’s vehicle spun around and caused a six year old girl to be ejected from the vehicle through the unsecured rear window.  The child was thrown onto the roadway and came to rest in the northbound traffic lane of Stateline Avenue.  She was transported to Wadley Regional Medical Center for emergency treatment by LifeNet EMS.

The investigating officers determined that the victim, along with two other girls, aged two and three years old, had been sitting in the rear cargo area of the vehicle at the time of the crash.  The children were not properly restrained, nor were there any child safety seats in the vehicle.

Officers arrested Eason without incident at a business in Texarkana on Friday evening.  She is currently being held in the Bi-State Jail, where her bond has been set at $100,000 for each of the three charges ($300,000).  Endangering a Child is classified as a State Jail Felony.