The Texarkana Texas Police are seeking information leading to the identity of an armed robber that struck Pasco’s Food Mart on Lake Drive in broad daylight.

The Texarkana Texas Police Department is investigating an armed robbery that occurred at a convenience store in the 2700 block of South Lake Drive on Tuesday afternoon. 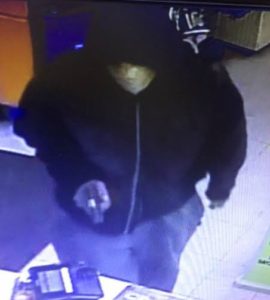 Officers were dispatched to the report of a robbery at the Pasco’s Food Mart at approximately 1:45 p.m. on Tuesday.  The clerk told officers that a man entered the store and pointed a pistol at him as he repeatedly demanded money from the cash register.  The clerk gave him an undisclosed amount of cash, and the suspect fled the store.  He was last seen running west from the store.

The suspect is described as a light skinned black male wearing a black jacket with a hood, grey sweatpants, and a white Halloween type mask.

Anyone with information about this robbery is asked to contact the Texarkana Texas Police Department at 903-798-3116 or CrimeStoppers at 903-793-STOP.