The Texarkana Texas Police are searching for Hakim Gerald Webster, 34, of Los Angeles, California in connection with the murder of Ralph Morrison, 33, of Texarkana who was shot in the head on Sunday evening while visiting friends on Lumpkin Street.

Texarkana, Texas Police continue to search for Hakim Gerald Webster, 34, of Los Angeles, California for murder.  An updated photograph of Webster is attached. 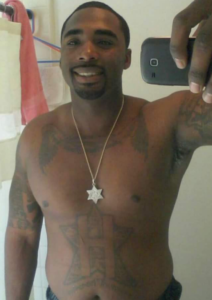 Officers were dispatched to a residence in the 400 block of Lumpkin Street at 6:33 on Sunday evening, where they found Ralph Morrison, 33, suffering from a single gunshot wound to the head.  Morrison was transported to a local hospital for treatment where he died as a result of his injuries.

Detectives determined Morrison was visiting with the residents of 405 Lumpkin Street.  Webster pulled up in front of the house in a light blue Chevrolet Uplander minivan with Texas license plate FST4968.  Webster exited the vehicle and fired multiple shots at the home, striking the victim as he sat on the front porch.  It is believed Webster and Morrison were involved in a dispute stemming from an incident several years ago. Webster fled the scene in the minivan prior to officers’ arrival.

Anyone with information on this crime is asked to call the Texarkana Texas Police Department at 903-798-3116 or CrimeStoppers at 903-793-STOP.