The Texarkana Texas Police Department has arrested Shamond Robinson, 27, for Aggravated Assault for his alleged involvement in a shooting that occurred on June 19th that injured a Texarkana Arkansas juvenile. 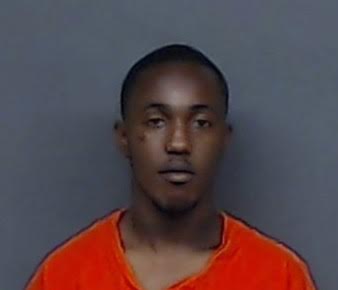 Robinson attended a large party on the parking lot of a business in the 900 block of New Boston Road on June 19.  At approximately 1:30 a.m., officers responded to a report of a large fight at that location.  The person calling 9-1-1 also reported that they possibly heard several shots being fired.  When officers arrived, they were told that a shooting victim had been transported to an area hospital by private vehicle.

According to witnesses, a fight had broken out in the parking lot between different groups at the party.  At some point, Robinson fired a handgun into the air in the parking lot several times before shooting into the crowd as they tried to run away.  Officers recovered several .45 caliber casings from the scene.  After Robinson was identified as the suspect, Detective Scott Sartor obtained a warrant for his arrest.  He was arrested at his home in Texarkana, Texas early Thursday morning without incident.

A seventeen year old Texarkana, Arkansas juvenile suffered three gunshot wounds to his wrist and hand area.  He was treated and released from the hospital later that day.  He is expected to make a full recovery.

Robinson was transported to the Bi-State Jail, where he remains in custody with a $100,000 bond.