After an hour long search Texarkana Texas Police arrested Caroline Minniweather of Texarkana for stealing a car that had a five year old child in the backseat. 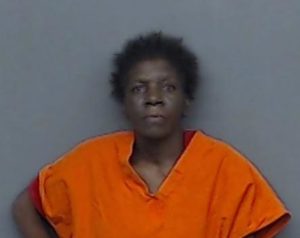 At 4:28 p.m. today, officers responded to the report of a stolen vehicle at Best Buy, located in the 4200 block of St. Michael Drive.  The 9-1-1 caller reported that her five year old son was in the vehicle when it was taken.  According to the child’s mother, Minnieweather asked for a ride to Best Buy.  As she waited outside in her vehicle for Minnieweather to make her purchase and return, she noticed Minnieweather involved in a confrontation with a store employee near the front of the store.  She got out of her vehicle to walk over to see what had happened and discovered that the employee was attempting to detain Minnieweather for shoplifting two laptop computers.  As the victim approached, Minnieweather was able to break free from the employee, run to the victim’s 2010 Ford Fusion, and then drive away with the child inside.

Approximately one hour later, officers found the stolen vehicle at a residence in the 1200 block of Stuckey Street.  The child, who was unharmed, had been left alone in the vehicle.  Minnieweather was located inside the residence and arrested without incident.  The child was safely returned to his mother.

Minnieweather was charged with Unlawful Restraint, Unauthorized Use of a Vehicle, Theft of Property, and Child Endangerment.  She is currently being held in the Bi-State Jail.