TTPD has arrested one woman and expects to arrest another in an incident that took place in the parking lot at the Walmart store in the 4000 block of New Boston Road on Thursday afternoon.

Officers responded to a report of a disturbance in the parking lot of Walmart in the 4000 block of New Boston Road on Thursdayat 6:12 p.m.  When they arrived, they located a woman who had a cut on her arm and several scratches on her face.  She told officers that she had been approached by Starks and another woman as she walked to her vehicle.  Starks is reported to be the sister of the victim’s 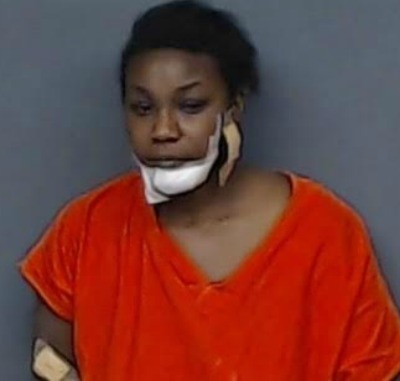 child’s father.  An argument ensued and quickly turned into a physical altercation between the three women.  At some point, the victim was able to retrieve a box cutter from her vehicle and began to slash at the other two women in an attempt to defend herself.  Before fleeing the scene, the second women stole an undisclosed amount of cash from the victim.

The victim was transported by ambulance to Christus St. Michael for treatment of non-life threatening injuries.  Soon after the victim arrived at the emergency room, Starks also arrived seeking treatment for her injuries, which included multiple lacerations.  After she was treated and released, Starks was arrested for Robbery and transported to the Bi-State Jail.  She is currently being held on a $25,000 bond.

The case remains under investigation and an additional arrest of the second woman is expected.