A Blevins Arkansas School Board member is in hot water after photos of him dressed in blackface with a protest sign that reads, “Blak Lives Matters” for a Halloween party were posted to social media and quickly went viral. Many are calling for him to resign. 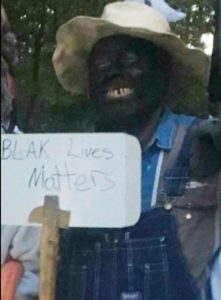 Ted Bonner of Blevins Arkansas in Hempstead County is the School Board Member at the center of the controversy after he dressed in blackface for a Halloween party. Photos were posted to Facebook and from there it took off. A recent Google Search showed at least 16,200 results on the subject. The topic that most are hitting on is that the Blevins School Board itself can take no disciplinary action. The School Board met last Monday and Bonner issued a sincere apology for the terrible lapse in judgment. When pressed for Bonner’s removal from the Board, School Board President Justice West stated that the school board had no authority to remove a member as members are officials elected by the citizens of the school district.

Before the school board meeting on Monday, the Blevins School District Superintendant, Billy Lee, released a statement that reads,

The District is deeply committed to creating and maintaining a strong and healthy school culture free of bullying and any form of discrimination. I have no personal knowledge of any actions by district staff or elected officials. Please rest assured that if it comes to my attention that any staff member has behaved in a way inconsistent with this district’s values and policy of anti-discrimination, a swift investigation and response would be forthcoming.

After the Monday night meeting, School Board President Justice West issued this statement,

I am aware of the incident that has occurred and find it very upsetting and distasteful. That action does not represent the values of the Blevins School District, the school board, or our community. However, the school board nor the school administration holds the power under the law to discipline or remove a school board member, only the voters have that power during the next school board election. The issue was addressed at Monday nights’ board meeting along with a sincere apology from the individual board member for the thoughtless act.

Some residents of the small southwest Arkansas town are furious that nothing can be done legally regarding the incident. Bonner can resign and step down from his position on the board himself, or voters can remove him from office when his term expires in 2018.

Bonner has not released a public statement regarding the incident, but a friend of the family said,

Ted is tremendously apologetic about this. He never meant anything racial and don’t have a racist bone in his body. It was at a private Halloween party and many of his friends, including black friends in attendance, encouraged him to wear the costume and that he never meant to hurt anybody. Blevins is a small town and we all, black and white grew up together, played together, and live together.

Among those calling for Bonner’s resignation is Arkansas NAACP Conference President Rizelle Arron that issued this statement,

Elected officials have an obligation to be a role model for our future leaders and Bonner has conducted himself in a manner that is unbecoming of an elected official and has brought embarrassment and negative national attention to the Blevins School District and the great state of Arkansas. Bonner should no longer be in a position of authority, especially as it relates to the development of children.