China King Buffet located at 5001 N. Stateline Avenue has been serving Chinese cuisine to Texarkana for 15 years, and are celebrating that milestone with a special customer appreciation event.

David Weng is the owner of China King Buffet and has been serving his food to the people of Texarkana for 15 years. Mr. Weng has built a loyal following of happy customers, and has plans for a customer appreciation event to thank the community for supporting his business and allowing him to call Texarkana “Home”.

Having moved into the old Bonanza Steakhouse location in the old K-Mart Plaza right at 15 years ago, China King offers a full buffet of all of your favorite dishes with both Szechaun and some Hunan rooted recipes for those that like “the spicy”. They also have some “Americanized” recipes that you expect to find at Chinese Buffets. The “Pepper Shrimp” at China King Buffet is one of the most authentic recipes you will find in the Ark-La-Tex. 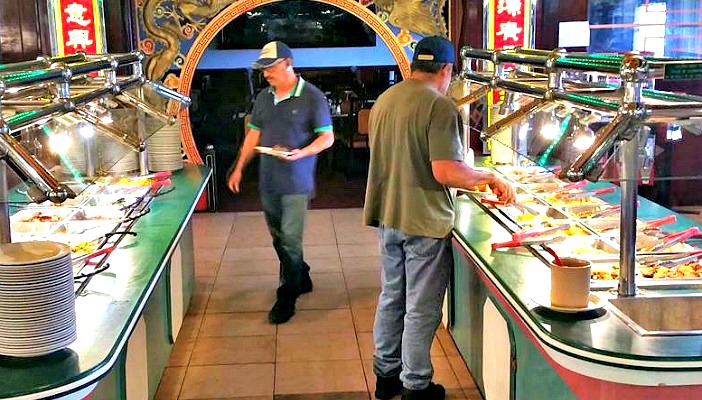 I recently wanted to try the buffet myself after hearing good and bad about the restaurant. (Always judge for yourself) I have eaten there before and do not recall having any problems. So, I stopped in for lunch to see what improvements have been made since Mr. Weng’s very recent return from China. I was impressed with the cleanliness of the restaurant. Their was no doubt about temps on the buffet lines, with the steam rising from the trays of beautifully prepared dishes. Well, me reviewing a buffet is sort of difficult because I EAT!

I can say that I started with hot & sour soup out of habit. While I was there, as an appetizer, I had fresh sushi rolls made to order just for me, and it was really good! Then steamed rice, and I pile it on… Broccoli Beef, Pepper Shrimp, Mushrooms, Beijing Shrimp, etc, etc… I know I made 3 trips for food, then I finish up with fresh fruit. I have no complaints, other than the chicken on the stick could have a little more sauce or seasoning. I ate around 11:30 a.m. before the lunch rush and the service was on point and very attentive.

As I was taking a few pics of the buffet, Mr. Weng approached me, and offered to show me the kitchen, I could tell he was eager to show me all of the recent improvements. I found everything to be clean, and I mean spotless clean. Some obviously new equipment, new shelving and when I was there, men were cleaning, and I mean scrubbing. It is easy to see that Mr. Weng has been very busy since returning home from visiting his family and friends in China.

In appreciation for 15 years of successful business in Texarkana, China King Buffet will be automatically taking 25% off of your total bill from July 28, 2016 to August 15, 2016. If you have not been to China King in a while, it is time for you to see and taste for yourself, and take advantage of that 25% off!

(In the end of my visit Mr. Weng comped my meal, but I am being as honest as I can in this review. However, being this is the first time someone comped me when I was trying to do a review I’m not sure if that makes this an advertorial or something, but I went in looking for problems, and I had a good experience. Hope you do too!)