This morning in a long time traditional ceremony with a virtual twist Colonel Stephan York relinquished command of Red River Army Depot to Colonel Jack Kredo. The crowd was small due to pandemic restrictions.

Due to the COVID-19 pandemic, the ceremony was attended by a small group of family
members and depot leadership while other depot team members watched via internal channels.
The full video was also later broadcasted virtually to community members via social media.
Brig. Gen. Darren L. Werner, commanding general of the Tank-automotive and Armaments
Command virtually officiated the ceremony.

“I’m very disappointed that I’m unable to be at Red River this morning, but as everyone is
aware, we’re still fighting the COVID-19 battle, and conducting this change of command via
video conference is another way we’re working to fight the virus and come out winners,” Werner
said. “Two years ago Steve (York) took command of Red River and he’s done an exceptional
job managing this highly specialized workforce.”

Werner continued by mentioning several depot accomplishments during York’s tenure such as
the increased performance to promise rate and the refurbishment of more than 1,600 High
Mobility Multipurpose Wheeled Vehicles resulting in a $130 million cost savings.

“Steve our nation and our Army owe you their gratitude for your commitment to service and your
commitment to leadership,” Werner said. “Thank you for being an exemplary officer and soldier.”

York, who joined the Red River team in July 2018, credited the hard work of the employees for
the depot’s success since he began as commander.

“I have watched you meet and exceed every challenged put before you,” York said. “Your name,
commitment, loyalty and dedication are second to none. Commanding Red River Army Depot
has been a tremendous opportunity for me and by far the most memorable assignment to date.
As I leave today, I ask that you remain committed to each other.”

Fortunately in our Army as the song goes, Werner said, we keep rolling along. The Army does a
great job ensuring that we have quality leadership required to guide an organization into an
increasingly challenging future.

“TACOM always gets the best, the cream of the crop – it’s a tradition we have here,” Werner
said. “Jack is one of the best and his track record shows it.” 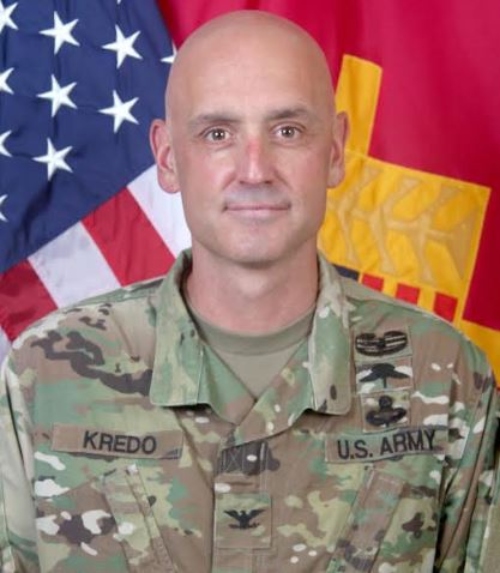 Kredo, a native of Colorado, was commissioned as a second lieutenant in the Quartermaster
Corps in 1997. His military career has taken him to several locations and assignments,
including: Fort Bragg, North Carolina where he served with the 782nd Main Support Battalion;
Kosovo with the 82nd Forward Support Battalion; Ft. Hood, Texas where he served as the
Supply and Services Officer with the 27th Main Support Battalion; Ft. Lee, Virginia serving as
Deputy Director of Aerial Delivery and Field Services Department at the Army Quartermaster
School and Ft. Riley, Kansas where he commanded the 541st Combat Sustainment Support
Battalion, 1st Infantry Division.

“I could not have asked for a better and more rewarding opportunity than to command this
fantastic organization and be a part of the larger Texarkana community,” Kredo said. “Red River
Army Depot has directly and indirectly affected every Solider I have led at some point in time.
You have a tremendous reputation and I can only hope to be a small part of continuing the
tradition of excellence.”

The ceremony featured depot team members Marshal McKellar, who served as the master of
ceremonies, Karen Greene who sang the National Anthem and Joe Johnson who gave the
invocation.