We spoke with Dustin Roach about his decision to dive from the wall into the churning waters of the spillway at Wright Patman Lake to save the life of a woman that was in a vehicle that crashed into the waters.

Dustin and his daughter Brynleigh, sat with us and explained how he believes it was God that put him at the right place at the right time to save the life of Lucia Mendoza, 29, a passenger in a vehicle that plunged into the raging waters. Dustin explains that when he saw her pop up above the surface, he dove headfirst in after her. 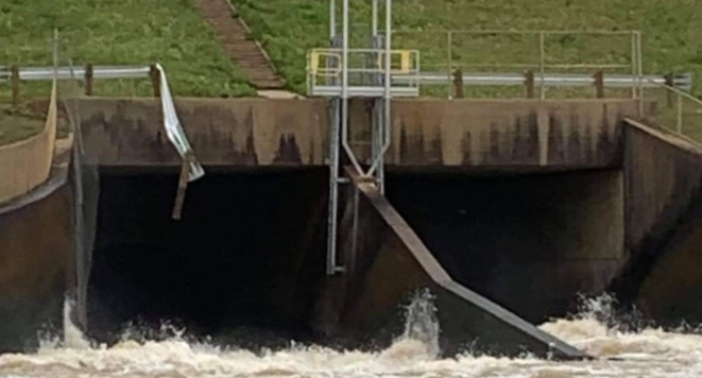 Dustin lives on Jack’s Isle at Millwood, and for some reason, as he headed out on Sunday, April 4 to catch some fish, instead of going to the spillway in Ashdown, he was drawn to Wright Patman in Texarkana. Dustin had not been at the spillway 15 minutes and had just gotten set up, when the accident happened.

The Texas Department of Public Safety issued this release on April 5:

On April 4, 2021, at approximately 6:00 p.m., Texas Department of Public Safety Troopers were notified of a one-vehicle crash on Sulphur Point Road near the spillway of Lake Wright Patman along the Bowie/Cass County Border. Preliminary investigation indicates that a 2000 GMC Yukon was traveling southeast on Sulphur Point Road. For an as yet undetermined reason, the GMC left the roadway, going through a barrier and into the spillway. A female passenger, Lucia Mendoza, 29, of Texarkana, was pulled out of the water to safety and transported to a local hospital with non-life-threatening injuries. A search for the driver is being conducted by the Texas Parks and Wildlife Game Wardens. The crash remains under investigation and no additional information is currently available.