Groundbreaking took place today at TexAmerica’s Center for Expal USA, an ammunition manufacturer that is a subsidiary of Spanish defense company Expal Systems S.A.. The company signed a 10 year lease to operate at the center in June of this year.

Expal produces ammunition from 5.56mm to aircraft bombs and is well known for its artillery and mortar systems. Expal has a load, assemble, and pack facility in the US and a nascent pyrotechnic capabilities. Expal USA’s mission at TexAmericas is creating a demilitarization facility with the development of new energetics for the DoD, and load assembly and packing operations for conventional ammunition.

The Ark-La-Tex multi-state region is a good location for energetics, demilitarization, and related business opportunities. Utility, property, and logistics costs are reasonable and the TexAmericas Center’s team members are professional, thorough, and a pleasure to work with.

Today was an exciting day for TexAmericas Center and the Texarkana Region, as we celebrated Expal USA’s groundbreaking for their newest site– located on TexAmericas Center’s East Campus. During the press conference, we were honored to have representatives from our region, county, and state announce over $2.95 million in grant funding that will help to move our region’s economy forward faster. TexAmericas Center is excited to continue to fulfill their mission for redeveloping the former military property and attracting new businesses and more jobs to our region. We want to say thank you to all of the community members who came out today to help make this event a huge success. We are proud to be a part of this supportive and welcoming community! 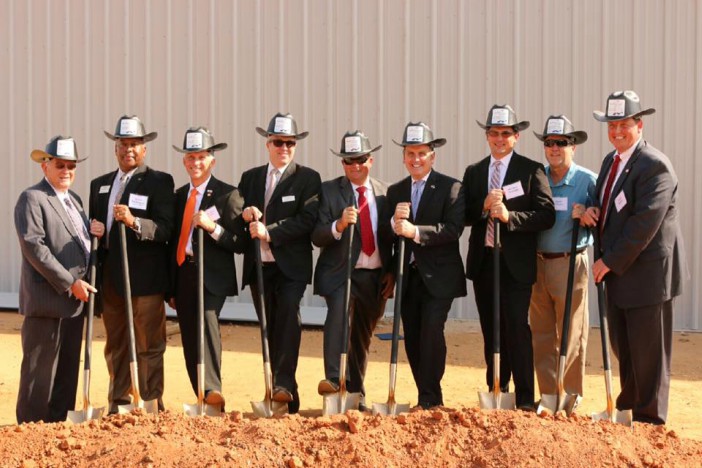 From its Dallas (Texas) headquarters, EXPAL USA operates three sites in the U.S. A load, assemble, pack and pyrotechnics manufacturing facility in a 120-acre site in Marshall (Texas). Another manufacturing facility located in Camp Minden (the former Louisiana army ammunition plant), where EXPAL USA operates a continuous energetics pilot plant based on twin-screw extruder technology for the manufacture of energetic materials that cannot be mixed by conventional methods. And the remaining site located next to the Red River Army Depot in Hooks (Texas), dedicated to the demilitarization of ammunition including cluster ammunition; this facility will be operational in December 2016.

EXPAL USA is the US subsidiary of the defense company, EXPAL Systems, which owns and operates 10 factories in Europe. EXPAL has more than 40 years of experience in the area of demilitarization with more than 1,000 different references from worldwide Armed Forces, including national and international programs for the eradication of anti-personnel landmines and cluster munitions. EXPAL has demilitarization facilities in Spain, Denmark, Bulgaria, Italy, Belarus and Brazil and recycles components to be reused in the civil explosives industry for public works, mining industry, hunting powders, etc.