From the time I was a kid we enjoyed Texarkana Regional Airport, from simply watching planes take-off and land, to an occasional airshow, and when we were kids we always thought of the old radar dome as “the giant golfball”. Here is more about the Texarkana Airforce Station that served as home to the 703rd Aircraft Control and Warning Squadron during the cold war.

I was contacted by a Facebook page requesting the use of some photos and went to their page to check it out and it was a nice piece about the old Texarkana Air Force Station on the Facebook page Southwest Arkansas Historian,

As tensions grew between the US and the Soviet Union in the 1950’s, the possibility of nuclear war became a grave concern for US military leadership. The United States Air Force, understanding this threat, formed the Air Defense Command in 1951 and tasked it with maintaining an air defense network across the United States. One piece of this network was established near the Texarkana Municipal Airport.

Completed in 1955, the Texarkana Air Force Station was the home base for the 703d Aircraft Control and Warning Squadron, and hosted 30 US Airmen. The station’s primary mission was to secure airspace in and around Texarkana, providing air traffic monitoring and control for the area. A particular concern of the station was the security of airspace around Barksdale Air Force Base in Shreveport, a nuclear armed base. In the event of any unidentified aircraft in the region, the Texarkana Air Force Station would guide interceptor aircraft to engage the aircraft.

The station received state of the art upgrades in 1958 and 1965, and began direct air control of civilian aircraft in the area. The new technology allowed the Texarkana Air Force Station to monitor crafts of all sizes all over the Four States.

However, as technology developed further, the need for costly, smaller stations such as Texarkana declined. The 703d Aircraft Control and Warning Squadron was deactivated in 1968. Radar Stations elsewhere could monitor airspace just as good without the station in Texarkana, and improved technology in fighter aircraft made regional ground control unnecessary. The buildings were eventually turned over to the Texarkana Regional Airport, and most remain today. The 703d’s primary radar dome stands visible from the airport today, a testament to the fears of a generation that were, fortunately, never realized. 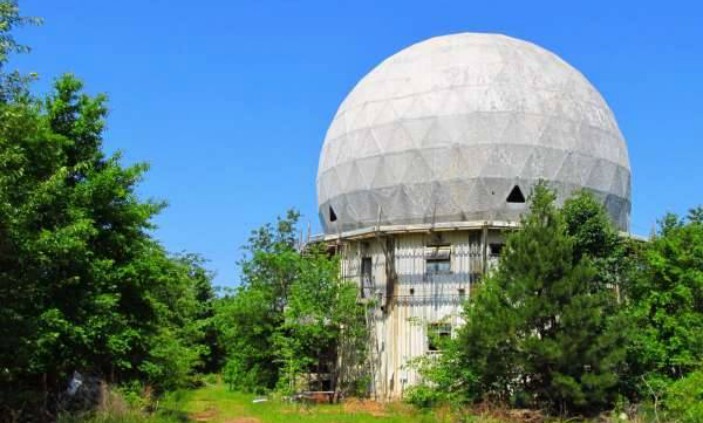 More photos of the area can be found at: http://radomes.org/museum/recent/TexarkanaAFSAR.html