Kissing Bugs continue to be a problem for people and pets and the threat from these triatomine bugs is growing. With cases of American Trypanosomiasis, or Chagas Disease, being reported in north and east Texas, we wanted to share a little information about the insects.

From the jump, I am no expert in insects at all. From the photos I have seen of the different types of “kissing bugs”, I think I have seen a lot of them. So, just gonna share a few things I found in looking for information.

With more cases being confirmed in Texas. The researchers at Texas A&M University have been conducting extensive studies into the insects and Chagas Disease (American Trypanosomiasis). Kissing bugs, get the nickname because it is common for bites to humans to be on the face near the mouth or eyes. Kissing Bugs are technically triatomine bugs, and there are 11 different species of these kissing bugs in the U.S. with the most common to the Ark-La-Tex area being the Triatoma sanguisuga and Triatoma gerstaeckeri, which can grow to about 1 inch in length.

Infection with Trypanosoma cruzi can cause Chagas disease in humans, dogs, and other mammals. Kissing bugs can transmit the parasite to hosts by biting and subsequently defecating near the site of the bite. The parasites live in the digestive tract of the bugs and are shed in the bug feces. When infectious bug fecal material contaminates the mucous membranes or the site of a bug bite on a mammal, transmission of the parasite can occur. Alternately, dogs can also become infected through the consumption of infected bugs. The parasite can be transmitted congenitally, through blood transfusion, and through transplantation of infected organs. Chagas disease is endemic throughout central and South America, and is increasingly recognized as both a human and veterinary health concern in the southern United States. Chagas disease became a reportable disease in Texas in 2013.

Chagas Disease in humans can be fatal,

Of those who are infected with the parasite, approximately 30% are at risk of developing chronic Chagas disease. Chronic Chagas disease includes cardiac complications and/or intestinal complications, and these signs may not be apparent until decades after the initial infection. Cardiac signs include enlarged heart, heart failure, altered heart rate, and/or cardiac arrest. Intestinal signs include an enlarged esophagus or colon, which can cause difficulties with digestion. Concerned individuals should discuss testing options with their physicians. Treatment of Chagas disease can be difficult, and drugs are available only through the CDC after consultation with a physician.

The Centers for Disease Control and Prevention has also posted an extensive FAQ on Triatomine bugs. 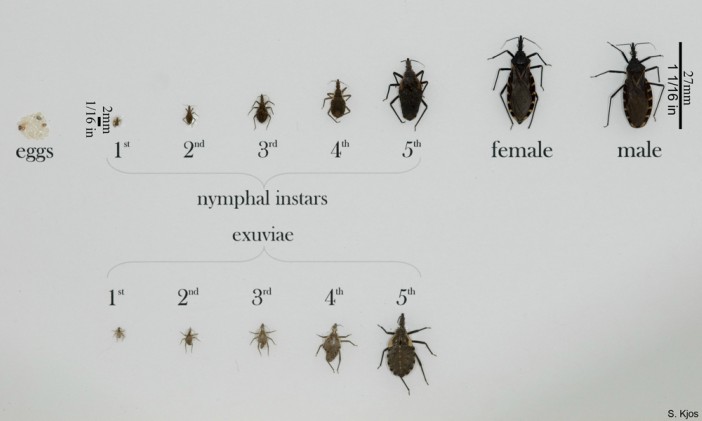 The CDC has determined that with the rate of growth of Chagas Disease, it is now mandatory that donated blood must be screened for the parasite because of the recognized risk of contracting Chagas through transfusion. The CDC offers information on getting bugs tested here.

According to the Texas Department of Human Services Chagas is considered at endemic level for dogs in the state,

In Texas, approximately 45% of the collected triatomine bugs have tested positive for T. cruzi, and Chagas is considered an endemic disease in dogs. From 2013 to 2014, 351 cases of Chagas disease in animals, primarily dogs, were reported from approximately 20% of Texas counties, representing all geographic regions of the state. Locally-acquired human cases are uncommon, but some have been reported. From 2013 to 2014, 39 human cases of Chagas disease were reported: 24 were acquired in another country, 12 were locally-acquired, and the location of acquisition was unknown for 3.

The TDHS goes onto suggest you visit this site if you think you may be infected with the disease.

The CDC has recommendations on how to prevent a kissing bug infestation,

The CDC suggests that if you suspect an insect of being a kissing bug, place it in a container and fill with rubbing alcohol or freeze in water and take to your local health department office as soon as possible.
See the results of research from the Texas A&M Team on Chagas Disease and Kissing Bugs, including an interactive map by clicking here… http://kissingbug.tamu.edu/.
Share. Twitter Facebook Pinterest LinkedIn Tumblr Email