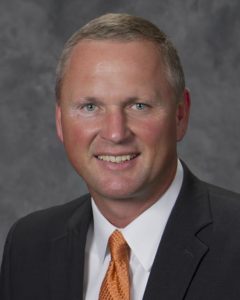 Each year, TASSP recognizes outstanding principals from the twenty Regional Education Service Centers throughout the state.  School administrators are nominated and chosen by their peers within their regions.  Nominations are based upon exemplary performance and outstanding leadership.  As the Region VIII Outstanding Principal of the Year, Bailey moved forward for consideration at the state level.

The TASSP Principal Image Committee reviews the applications and selects the state finalists.  They are then interviewed by the committee with the award winner being announced during the 2017 TASSP Summer Conference in Austin.  If selected as the state winner, Bailey will advance to compete for the NASSP Principal of the Year Award.

“The Principal Image Committee was challenged in naming the finalists due to the evidence of exemplary leadership qualities in each applicant,” said Beverly Kauffmann, Committee Member.

He is a member and Assistant Regional Coordinator for the Texas Association of Secondary School Principals, serves on the Region VIII Education Service Center Principal Advisory Board and is a member of the Texas A&M University – Texarkana Alumni and the TAMU-T Advisory Committee. Brad also is a member of the National Association of Secondary School Principals, Texarkana Oaklawn Rotary International Club, Leadership Texarkana and Kappa Alpha Order Fraternity.

He has been actively involved in the Texarkana community through his volunteer work with Komen Texarkana Race for the Cure, St. Jude’s Hospital and Rotary International.