With Summer back on us and temps rising, not to mention the humidity, it is a dangerous time of year for pets left behind in vehicles while their people “run in for just a sec.” We spoke to officers from our local Police departments about rescuing pets from a hot car about the consequences and the best way to handle the situation.

Cars and trucks exposed to the rising temperatures can be fatal, fast for children and pets… 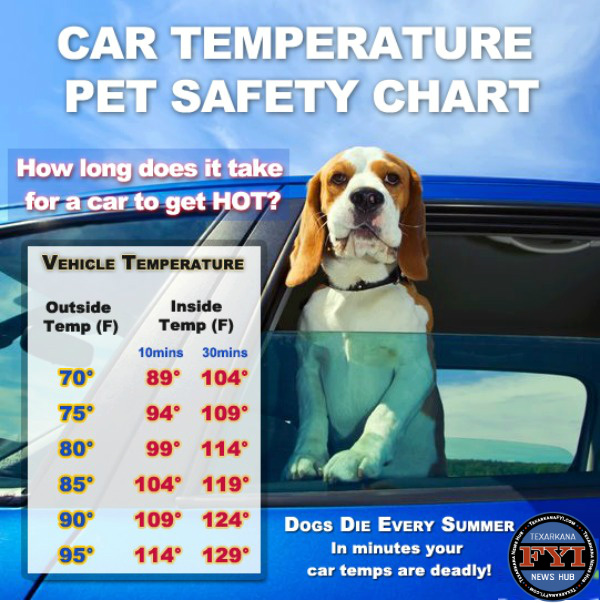 There are literally thousands of people on social media and elsewhere that will tell you that they would not hesitate to break a car window to rescue a dog suffering in the heat. However, no matter how well meaning you may be, breaking a window on someone’s vehicle could have consequences for you, no matter how justified.

We reached out to Public Information Officers at TAPD and TTPD for input and Shawn Vaughn with TTPD regarding breaking a window to save a dog. We also asked if the dog is not in distress, who determines if they harmed the animal.

The first thing should be to call us.  In most cases, we will be there in just a few minutes to help assess the situation and decide the best course of action.

We recognize this to be a very dangerous situation for either a child or an animal – one with potentially deadly consequences.  However, breaking out someone else’s car window should absolutely be a last resort measure and only if there is clearly no other option to save the child or animal.  That said, if you believe they may die if you do not take immediate action, I would say do what you have to do to save a life.

However, you should realize that the owner of the car could file criminal charges against you for breaking out the window.  Another possibility is that they could sue you to try to recover the cost of repairing the damage that you did to their car.  While you could argue that the odds of them actually winning either a criminal or civil case against you in a situation like this might be slim, both are possibilities.  Again, the best course of action would be to call the police to have them come help.

I agree with Captain Vaughn in his statement. Calls of this nature are evaluated by the officer responding on a case by case basis along with the information available at the time such as weather and temperature. We would normally call pop a lock or similar vendor and breaking a window would be a last resort, but we would do it if a life was threatened and the police were involved. And yes upon investigation it is up to the responding officer to determine what legal action would be necessary whether it be a citation issued or a physical arrest.

According to About.com in most states, a dog is considered property and you could face criminal charges. So, take from this that no matter the severity of the animal’s condition, call the police before taking any action. With that in mind, love your pets and think. Keep those furbabies safe, and they will love you for it furever.