Lynn Bolt, and her daughter Andie Bolt, share a great story about attending and graduating nursing school together. Both graduated from the University of Arkansas Hope-Texarkana (UAHT) Licensed Practical Nursing (LPN) program on May 8.

It’s not often that a mother and daughter attend college at the same time, let alone attend the same college and graduate in the same field of study. But being exceptional could easily describe Lynn Bolt, and her daughter Andie Bolt, who both graduated from the University of Arkansas Hope-Texarkana (UAHT) Licensed Practical Nursing (LPN) program on May 8.

Lynn, of Lewisville, Arkansas, previously worked as a Paramedic for the Lafayette County Ambulance Service. “As I began to get a little older, I felt that I needed to enter a field that wasn’t quite as physically demanding,” Lynn said. “The nursing field felt like a natural transition.” 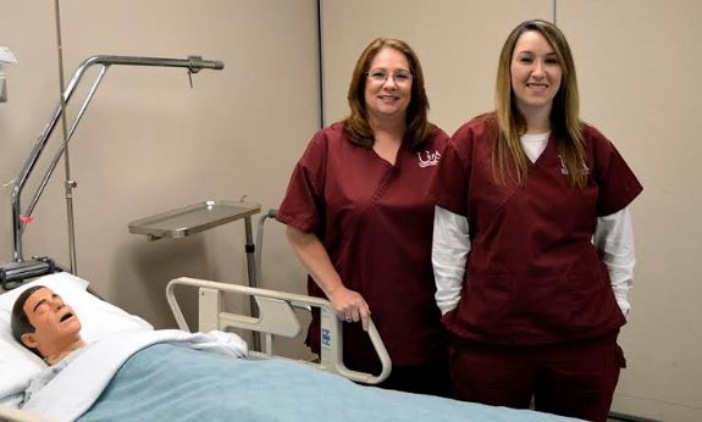 Andie, also of Lewisville, went to work at Wadley Regional Medical Center in Texarkana as a Patient Care Technician after high school. “When I went to work at Wadley I thoroughly enjoyed my job,” Andie said. “The environment was great, and I felt like I was making a difference, especially when patients would tell me how much they appreciated my help. That job helped me make up my mind to attend nursing school.”

“When we enrolled at UAHT, we had no plans of entering into the LPN program together,” noted Lynn. “We both had different prerequisite courses to take, but as fate would have it, we finished the courses at the same time and entered into the program together.” 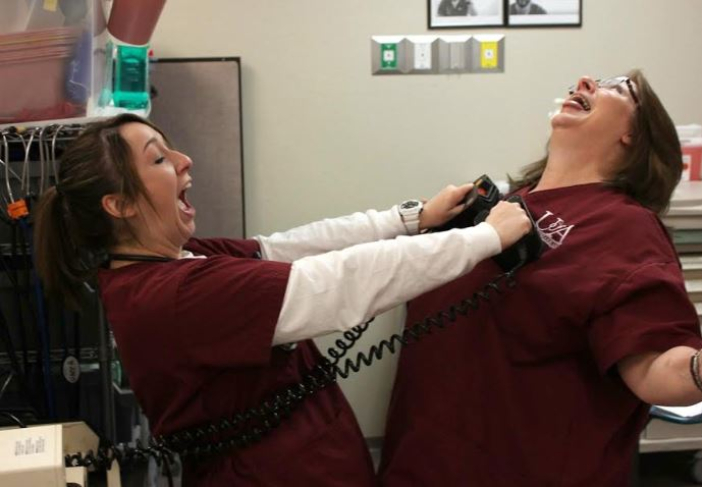 For this dynamic duo, there were several advantages to being in the same program together. “We could help each other stay on track with assignments and schedules,” said Lynn. “It also meant that I had someone I could get away with pestering!” “Being in the program together had a lot of benefits for me as well,” noted Andie. “I got a free ride to school and free lunch every day. It saved me a lot of money! We always received funny looks when I would ask my classmate/mom for her debit card at clinical sites.”

“It was great being in the same program with my mom,” said Andie. “The only problem was, that when you also live with your mom, you are with her every single minute of every single day!” “I usually had to leave the house to study,” Andie noted. “It’s hard to study with the same person who is telling you to wash the dishes.” “Studying became somewhat of a competition between us,” Lynn said. “I think she got tired of me always being right.”

This mother, daughter team would not have planned things any other way or attended any other college now that they have completed the program. “We chose UAHT for several reasons,” said both. “The reputation of the LPN Program is outstanding, and we both have friends who graduated from it. It’s also a high quality program because it has one of the highest State Board Exam pass rates of any nursing program and is the most affordable program we found.” “From the first day we arrived on campus we felt like we were part of a family,” noted Lynn. “I became known as ‘Momma Lynn’ to the whole class, even the instructors.” “I think our classmates really enjoyed us being part of the program,” Andie said. “We kept them entertained so much that we became known as the ‘Kardashians’ of the class.”

The journey of higher education may be over for these two as a team, but both plan to continue on their educational paths. Lynn plans to enter the ARNEC LPN to RN transition program at UAHT this fall, and Andie intends to work as an LPN for a year while she takes prerequisite courses to enter the ARNEC program as well. “We are so proud of each other,” said both. “We would not trade this experience for anything.” 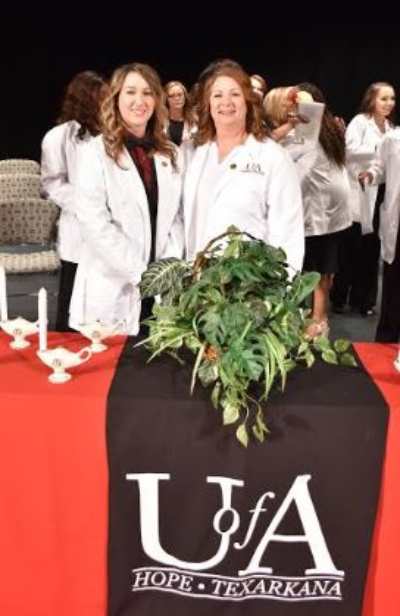 UAHT offers a daytime LPN program on the Hope campus and an evening LPN program on the Texarkana campus. The program is a full-time, 11-month, selective admission program leading to a Technical Certificate in Practical Nursing. It prepares students for licensure through the National Council Licensing Examination (NCLEX-PN). The program meets the requirements for accreditation by the Arkansas State Board of Nursing. For more information, call 870-7775722.