The Hideout in downtown Texarkana is now open for business, and are especially thankful this year. Plans are for a big Night Before Thanksgiving party this Wednesday night, November 24 with live music from the Rewind Band.

Wednesday, November 24 The Hideout, is hosting a “Night Before Thanksgiving” party, located at 311 East Broad. The venue opens at 6 pm with The Rewind Band taking the stage at 9:00 pm.

The Hideout has been a labor of love with the whole Wright family working together night and day to get the business open and running, as they could with their full-time jobs. They are still working on the project, as Ms. Irma has new ideas every day, especially with “Irma’s Hideout”, the rooftop bar. The Hideout has an old-school gangster vibe, with mural work from Ms. Darlene Taylor on the walls depicting some of history’s most notorious gangsters, like Frank Lucas and Al Capone, along with images from the Cotton Club and more.

The Peak Fighting Cage is set up inside the Hideout for the next Pro Mixed Martial Arts event set for January 22, 2022, and there is still a lot of room for vintage video games, pool tables, bands, and of course some great drinks. Enjoy the rooftop view of all of the new life in downtown Texarkana.

The Wrights, Joe, and Les over at Crossties, Jamie at the Railyard, and a bunch of others, there is a great group of people downtown working together that has brought us all from a place where we would once say we were “going to so and so in downtown”…  to making downtown the destination itself. Now people are saying “let’s go downtown” knowing there is great food from Zapata’s, Verona’s, or the new food trucks in town, to the bars, and live music almost everywhere. The most exciting part it is still growing!

On your next trip “downtown”, stop by The Hideout and visit with Jeff, Irma, Priscilla, Allison, Christian, and Ashley. 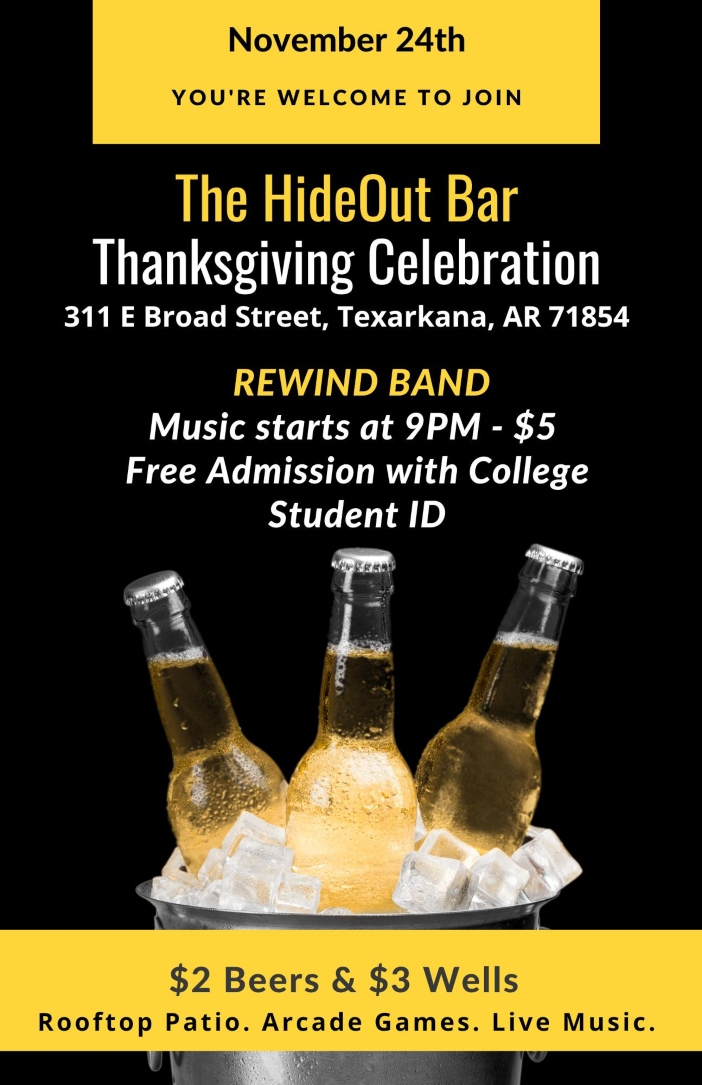