The best in Arkansas and one of the most respected organizations in the sport of MMA today, Peak Fighting returns to Texarkana, Arkansas on August 20 & 21 at the Texarkana Arkansas Convention Center. UFC fighters will be on hand both nights, and the top up and comers in the sport will battle in the 30-foot cage.

Tickets are available for both nights, but sell fast… get them now at PEAKFIGHTING.COM, if you miss out on the tickets, the Pay-per-view productions are really good and catch all of the action.

Peak Fighting has quickly become one of the most respected series taking some great fighters to the bigger leagues like Bellator and of course the UFC. Local fighters will be appearing both nights, support them now, and don’t wait until they blow up big time.

Above all other venues where Peak Fighting has performed, Texarkana is the fighter’s choice by far above Little Rock, Hot Springs, Springdale, and others. The layout of the convention center, the Holiday Inn, and the convenience of the other hotels that fill up is a big part of the allure for the fighters, their families, and friends. UFC Fighters will be in town both nights and happy to meet and talk to fans, including T.J. Brown, coming off of a recent win on UFC Fight Night.

The link for Pay-per-view for each night is at PEAKFIGHTING.COM.

Tickets are available for PF14. Friday night brings many of the upper echelons in the MMA amateurs, on the edge of making the step to pro. 12 matches on a very impressive card, that includes local fighters. The main event will feature two Peak Fighting Title Fights! 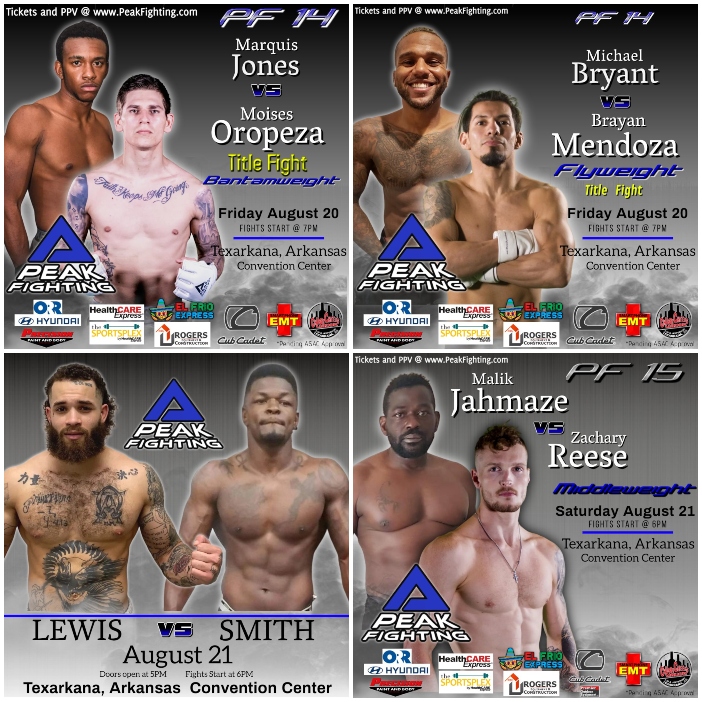 Saturday, August 21 is PF: 15, brings 15 fights, including the pros and title fights! This card is stacked with top contenders from around the globe with the Main Event featuring some of the Peak Fighting guest co-commentators Zachary Reese and Malik Lewis. See some of their previous fights on the Peak Fighting YouTube Channel and follow them on Facebook.

(Bouts subject to change with little or no notice)