Texarkana Arkansas Police are seeking any information that will help locate 14-year-old Onyx Gibson. The teen was last known to be at the Riverview Facility on Arkansas Boulevard. It is reported that he fled the facility around 9:00 pm on January 7.

The Texarkana Arkansas Police Department is seeking help within the community.

On January 7, 2022, around 9:00 pm, several juveniles, including Onyx Gibson, pushed a
rear door open from the Riverview Facility located at 701 Arkansas Boulevard Texarkana,
Arkansas, and fled. Within hours, Officers found all the juveniles who fled the facility
except for Mr. Gibson.

It is not known what Mr. Gibson was last seen wearing. Mr. Gibson is approximately 5’2”,
weighing around 120 lbs. has blonde hair and green eyes. He usually wears glasses, but it is
unknown if he left the Riverview Facility with them.

Mr. Gibson’s family is cooperating with TAPD in the search for Onyx.

Detectives are following up with all leads on Mr. Gibson’s possible sightings.

If you see Onyx Gibson, we encourage the community to call 911 so officers can respond
and escort Mr. Gibson back to the Riverview Facility. 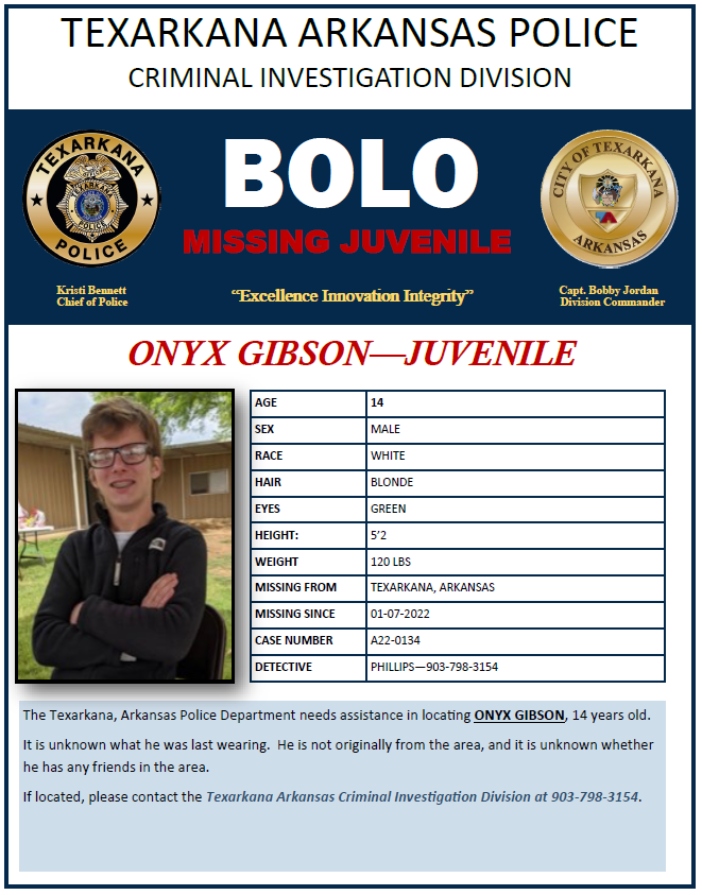