For those that were in Texarkana for Christmas 2000 and the day after will never forget the sights and sounds of the city after the historic Ice Storm that basically shut down a large part of the Ark-La-Tex region.

For many the biggest issue they struggled with was a lack of electricity. At my home, we were without power for nine days. (After 5 days, nerves over Christmas lights in neighboring areas really started to burn me up, especially when the parking lot of the mall was lit up in the sky over my home at night. We were 9 days without electricity total, and lived right behind Albertsons on Richmond at the time). Some further out from us were without power for two weeks, and there were stories of some out in “country” that went as much as 30 days.

We shared this pic on our Facebook Page, and here are a few of the comments…

Like huge chandeliers crashing to the floor. 14 days without electricity. We were lucky in our old house with hot water and oven heat. Family stories, card games and helping our neighbors kept any of us from feeling like we were bad off. For all its damage, it was a good experience for us. – Amy White

The night everything crashed. Will never forget the sounds of sirens, constant echoes of snapping in the distance much like gunshots, and generators humming. – Jimmy Roberts

18 days without power right smack dab in the middle of town. Sat up on Christmas night listening to what sounded like a war zone outside – Kelly Ramsey

We were without electricity for 21 days. Thankfully we had a propane stove & propane fireplace. Downfall, we had well water so we had to haul our water in. We did get a motel room on the weekend a few times to give us a break. I see people complain about being without electricity for a few hours & think that’s petty. Everytime ours goes out now even for a day, I’m just thankful it’s not 21 days. We can handle it! – Darla Smith

This Ice Storm is listed as number 7 of the top 10 worst ice storms to ever occur in the United States, here are a few of the facts.

In mid-December 2000, an ice storm left more than 500,000 without power in parts of Texas, Oklahoma and Arkansas. At the time, one Arkansas official called it the most destructive ice storm he’d seen to the electrical utility infrastructure, there.

Just under two weeks later, the weather grinch delivered a lump of coal to stockings from New Mexico to Oklahoma and Arkansas in the form of another ice storm.

Over 1 inch of accumulated ice in many locations from northeast Texas into southeast Oklahoma, Arkansas and northern Louisiana.

These were the two most widespread, damaging ice storms of record in Arkansas history at the time, dating to 1819, according to the National Weather Service.

Much of cities of Texarkana, Hot Springs and Little Rock, Ark. were without power.

Water systems in Texarkana and Hot Springs, Ark. were also down. 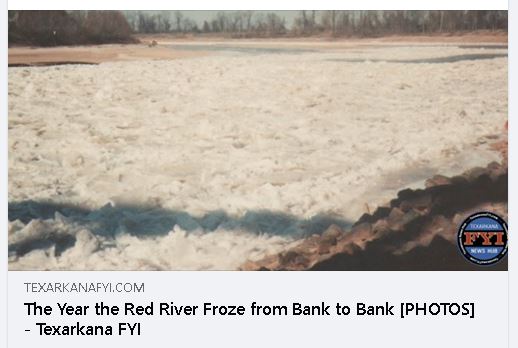