Rescuers were finally able to catch “Cheeto” a dog with his head stuck in a plastic cheese puff container. The dog was first spotted weeks ago and searchers have been trying to find and save him. Today, Greg King was able to spot and save the pup!

Dozens of rescuers have searched for Cheeto for weeks near Wamba, Texas. Braving the heat, humidity, and dangerous snakes, one searcher was bitten by a copperhead snake on Monday while looking for Cheeto and is expected to be just fine after receiving treatment for the bite. 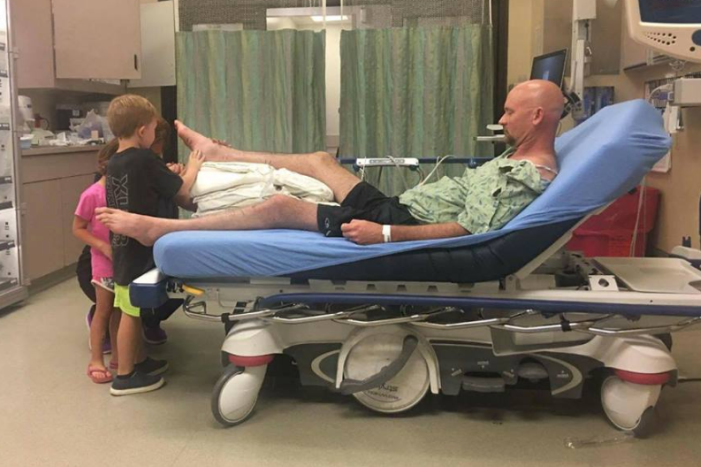 Greg King, a local animal advocate, spent the last 3 nights in the woods using traps and cameras and doing everything he could think of to catch Cheeto, but the dog was running scared. Greg said that he knew Cheeto was suffocating and every day he was scared that he would find Cheeto dead. As friend laughed in the background, Greg talked about how he had told all that were searching the area “Do not chase him”, and just as soon as Greg caught a glimpse of Cheeto, he took off chasing after him, but was fast enough to catch him and hold him down.

Cheeto was then taken to Dr. Stacey Hendershott at Pleasant Grove Animal Hospital for treatment and is expected to fully recover from his ordeal.

Cheeto, the dog on the run with a cheese puff container on his head has been rescued! Animal Rescue advocate, Greg King, was able to capture Cheeto today. A great effort by a lot of super people to find and save this pup, one searcher was bitten by a copperhead snake while hunting for the dog over the weekend. Big props to all involved.(video submitted to texarkanaFYI)

Cheeto Rescue Greg King ❤️❤️❤️Any donations may be made to texarkanaanimalleague.org for Cheeto or straight to the vet: 903 838 6565- Pleasant Grove Animal Clinic –Cheeto