In 2023 the Texarkana Texas Police Department will celebrate 150 years of service to the community since the incorporation of the City in 1873.

Chief Kevin Schutte has authorized a special commemorative badge to be worn by the Texarkana Texas Police Department in 2023.

Just as the upcoming year marks the 150th anniversary of the incorporation of Texarkana, Texas as a city, it is also the 150th anniversary of the Texarkana Texas Police Department. To recognize this very special milestone, Chief Kevin Schutte appointed a committee of officers to design a “150 Year Anniversary Commemorative Badge” that would be worn by Texarkana Texas police officers during 2023.  The committee prepared several badge design options for consideration, and the Department’s officers later voted on the one they liked best.

The selected badge design is two toned and features full color American and Texas flags on the sides.  It denotes the dates 1873-2023, and every badge is numbered with 150 on its face.

As each commemorative badge was purchased by the officers, there was no cost to the City.  The local police associations helped offset some of the cost for their membership.  Having been purchased by each individual officer, they will keep their badge as a commemorative keepsake at the end of the year.

In addition to the department issued badge, Chief Kevin Schutte has commissioned the “150th Anniversary Commemorative Badge” as an official department badge for the Texarkana Texas Police Department for the 2023 calendar year.  Those officers who do not purchase the special badge will continue to wear the current shield.

Chief Kevin Schutte said, “This is a great way to display the pride we have in our department and city for its 150th anniversary without negatively impacting the City’s budget.”

While not every officer opted to participate in the commemorative badge program at this time, all will have the continued option to purchase one throughout 2023 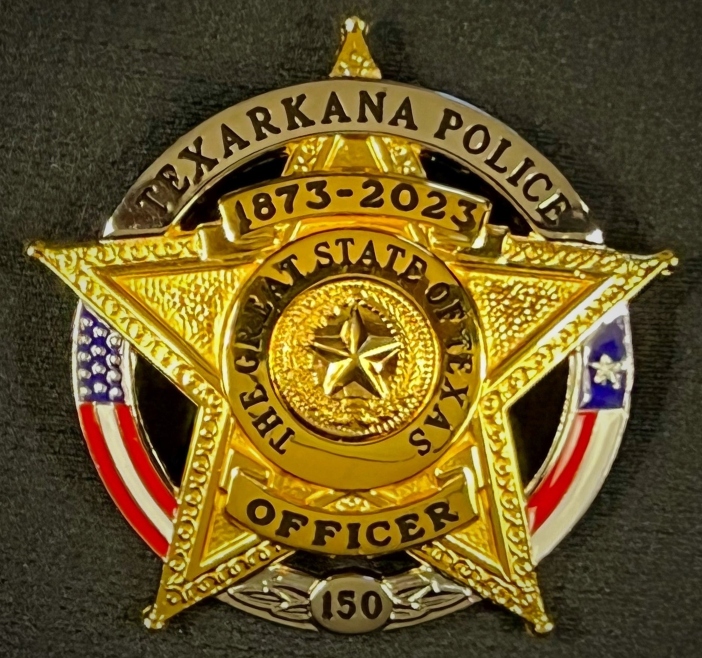