As DJ’s story spread on social media, law enforcement agencies from all over the state of Texas reached out to DJ’s father, Theodis Daniel has taken his son’s mission to join 100 agencies seriously and expected it to take a while, but when D.J. adds the 6 local agencies welcoming him to the Ark-La-Tex on Thursday, he will become an honorary police officer of more than 250 agencies, with more trying to recruit him everyday.

The Texarkana area police agencies are coming together for one fantastic event in front of
the Stateline Avenue Post Office on February 24th, 2022, at 10:00 am.
You may have seen him on social media being sworn in as an Honorary Police Officer
across the country. His name is Devarjaye (DJ) Daniel, and he is ten years old and is battling
terminal brain and spine cancer. He wants to be a police officer, and his father, Theodis
Daniel, has agreed to travel to any state that would swear his son in as an Honorary Police
Officer.

The agencies taking part in this great oath of office for the Arkansas side of town are TAPD
and The Miller County Sheriff’s Office. For the Texas side of town will be TTPD, Bowie
County Sheriff’s Office, Wake Village Police Department, and Nash Police Department.
If the rain decides to show up, we will relocate to the first floor of the Bi-State Center.
We hope to see you at this fantastic event for this young man. 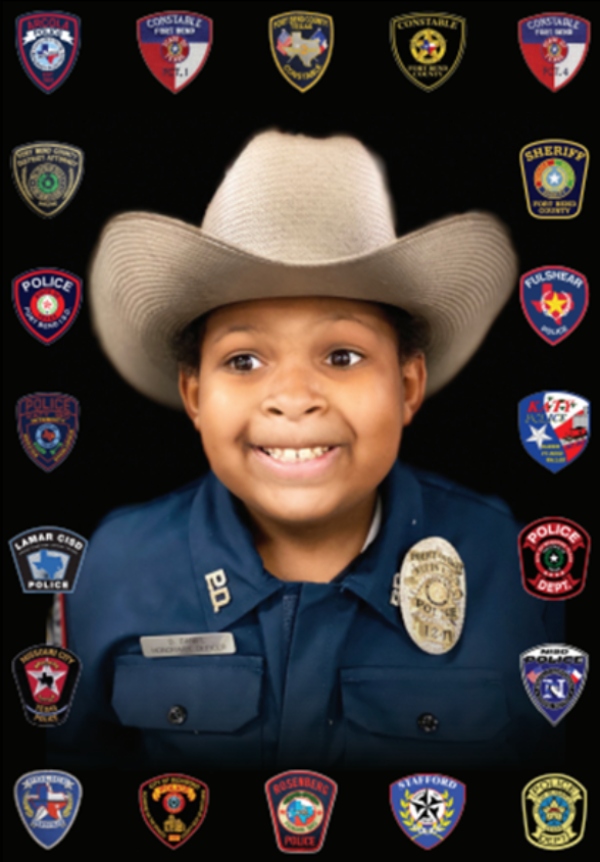 Devarjaye’s quest began to join 100 departments, for two reasons, to spread awareness of childhood cancers, but also for the legacy of Abigail Arias. Abigail was a 7-year-old little girl that dreamed of being a police officer. Arias was sworn in as an honorary officer of the Freeport Police Department in 2019 before losing her battle with lung cancer. The Arias family started a charity called Abigail’s Reach to help other families with children battling cancer. Once DJ takes his oath on Thursday, he will be a member of more than 250 departments, with even more to go.

(DJ has everything we are looking for in an officer, strength, courage, nobility, passion, honor, selflessness, resilience, and love. God bless him, his family, and our local law enforcement agencies.)