The Texarkana Texas Police Department was the lead agency in the arrest of a subject that led officers from both sides of Stateline on an odd slow-speed chase that ended at the steps of the Bi-State Justice Building. The suspect later died while in custody of the Bi-State Jail.

I was participating in a Ride-along with TTPD on the 11/17/2017 night shift that also includes the morning of 11/18/2017. This is what I am able to personally contribute to this story at this point…

At approximately 2:00 am, a slow-speed chase began that ended with the suspect being penned up on Broadstreet in front of the Bi-State Justice Building. As the suspect passed in front of the Bi-State Building, with units from TAPD and TTPD following, the suspect was yelling at witnesses on Broadstreet, “Kill me, Kill me”, and something about “holding a gun to his head”. Units were able to get the suspect stopped, and out of the vehicle and the suspect, from my uneducated or untrained perspective he was clearly under the influence of something or in some sort of crisis for sure and acting very erratic. Officers with TTPD and TAPD exercised extreme restraint in handling the suspect. Once the man was cuffed he became extremely violent and combative. He began screaming at officers to kill him, he kicked officers and spit at them, and at one point was banging his own head on the patrol car. I was surprised at the level of restraint and concern for the suspect shown by all officers on scene. I expected him to be tazed or pepper sprayed but they took great care to prevent him from harming himself, even as he was being combative with them. It was at that point that officers decided to bring the suspect into the building through the front doors of the Bi-State Building and up to the fourth floor on the public elevators while other officers secured the suspect vehicle. With the officers from TAPD and TTPD supporting the suspect, there was no room on the elevator and I opted to bail out. That is where my witness testimony to the incident ends. I was not present as he was being booked in on the fourth floor and have no knowledge of anthing that may have occured with the man after his booking. 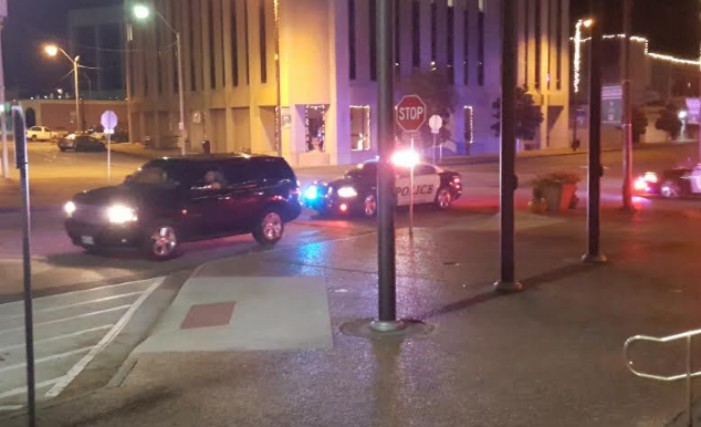 After this, I will only be sharing information that comes from authorities with the investigation regarding the arrest, and subsequent death of the subject. His name, age, hometown, etc. will come from authorities in future posts.

TTPD has released more information on the investigation HERE.

The jail falls under the responsibility of the Bowie County Sheriff’s Department and is managed by LaSalle Corrections. Sheriff James Prince responded to our question with this…

The jail is operated by Lasalle Corrections. I have the overall responsibility for the jail. We and Texas Rangers are investigating. That is all I am prepared to say, at this time. Tomorrow I may say more.

I had intended to write a blog post about the entire night but will have to wait to find out what I can and cannot say about all of this… I am just a blogger but want to make sure that I don’t mess up any investigations. I will say that officers from both TTPD and TAPD handled this situation very professionally with genuine concern for this suspect. At no time did I witness that man mistreated in any way by a police officer that morning. I would not even call it strong force, much less excessive. I am sure that the Texas Rangers and Bowie County will conduct a very comprehensive and thorough investigation.