The Texarkana Arkansas Police and other law enforcement agencies have taken an internet threat of a school shooting that we received over the weekend very seriously and have taken extra precautions at all area campuses.

Late Sunday afternoon texarkanaFYI.com received a message that had a screen cap from a social media post with a threat of a school shooting. We passed the information on to T.A.P.D.. This is the cap we received… 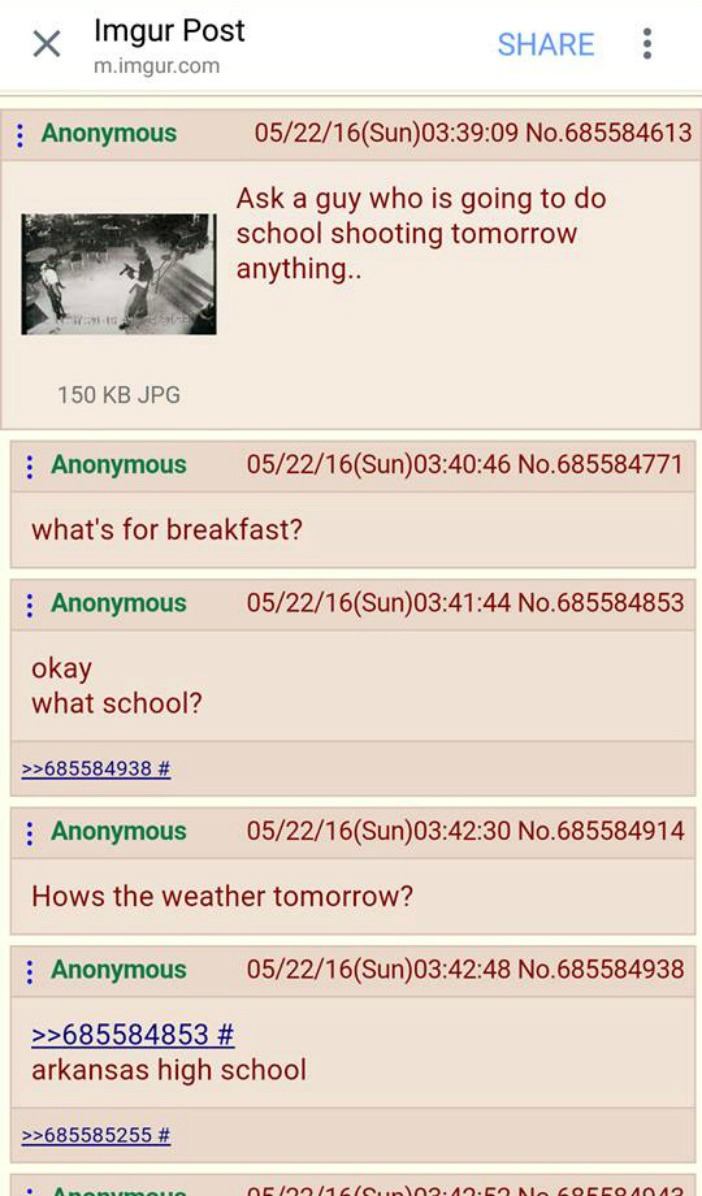 When we spoke to Officer Kristi Bennett with T.A.P.D. she was already aware of the threat and investigators were already working on tracking down the information surrounding the post through official channels.

The T.A.P.D. has released this statement this morning on their Facebook page…

The Texarkana, Arkansas Police Department received some information from the Arkansas State Police late Sunday afternoon concerning an unsubstantiated Facebook post about a possible shooting that will occur at an Arkansas High School or possibly Arkansas High School in Texarkana, AR. They were unclear at the time the information was originally obtained if it pertained to Texarkana. The information we received from the Arkansas State Police is being reviewed by our Criminal Investigation Division.

We are aware this is being repeated through social media in the Texarkana Metro Area. The Chief of Police and Command Staff took immediate action on Sunday afternoon to begin the task of trying to determine if this post has merit and pertains to Arkansas High School in Texarkana.

We have taken precautionary measures to ensure the safety of our students and school staff. Officers from the Texarkana, Arkansas Special Operations Section arrived at Arkansas High School at 5am this morning and began securing and checking the area. They will be at the school and in the area until the end of the day today.

We have also put additional officers in both unmarked and marked police cars patrolling our Elementary Schools, Middle School, and Junior High School. In these types of situations it is better to enhance security and make sure we have enough resources at our schools to be able to respond to any potential problems.